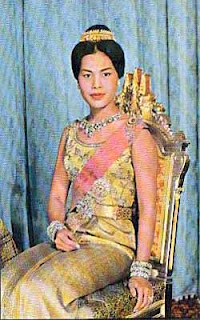 Today, Her Majesty Queen Sirikit of Thailand celebrated her 77th birthday. It was in 1950 that she married His Majesty King Bhumibol Adulyadej the Great of Thailand, the longest reigning monarch in the world today. In recent years as his age has caused the revered king to withdraw more and more from royal affairs it has been Queen Sirikit who has taken up the slack, supported her husband and effectively been the driving force behind the Thai monarchy though not in a way that draws attention to herself but keeps the focus on her beloved husband who certainly deserves the affection, respect and widespread devotion which the vast majority of his subjects feel for him. Her birthday is a national holiday in the Kingdom of Thailand and doubles as Mother's Day in her honor as well. The Mad Monarchist joins with all loyal Thais and all fans of the venerable Thai monarchy in wishing Her Majesty a very happy birthday with more to come!
Posted by MadMonarchist at 9:13 PM