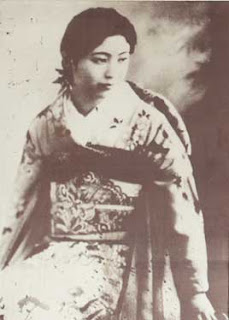 The lady Hiro Saga was born on April 16, 1914 in Tokyo to the Marquis Saga who was a distant relative of the Japanese Emperor Hirohito. Educated in a prestigious girls' school she was first introduced to her future husband, HIH Prince Pu-Chieh of China, in 1937. The Prince was the younger brother of the last Emperor of China and the Japanese were adamant that, as the Emperor had no children, his brother should marry a Japanese girl of appropriate rank with some relation to the Imperial Family. Pu-Chieh chose Hiro Saga from a set of photos the Japanese had given him to look over while the Prince was in Japan undergoing military training.

The couple were engaged at the Tokyo embassy of the Empire of Manchukuo on February 2, 1938 and were married at the Kudanzaka Imperial Army Hall in Tokyo on April 3. In October they moved to Manchukuo. Despite it being an arranged marriage of sorts (and the second for Pu-Chieh) the marriage was a happy one with Princess Hiro Saga working very hard to support her husband in what was an extremely difficult time and place for himself and his brother. In 1939 Hiro Saga gave birth to the couple's first child, Princess Huisheng. In 1941 she gave birth to their second child Princess Yunsheng. However, it was an extremely difficult time and place to be in with the war, political opposition to Manchukuo and considerable tension between the Chinese and Japanese in the palace. Princess Hiro Saga never tried to influence her husband but made his interests her own. She was his faithful wife even before she was Japanese. It was a heart-wrenching moment in 1945 when the Soviet invasion of Manchuria forced them to go their seperate ways, not knowing that it would be many, many years before they would meet again.

Princess Hiro Saga, Princess Yunsheng and Empress Wan Jung tried to reach Korea by train but were captured by Chinese communist bandits. After being shuttled back and forth from one prison to the next she was finally sent to Shanghai from which she was eventually allowed to return to Japan. Her husband remained in a Red Chinese prison until 1961 and it must have been a great comfort to him, for a man whose entire world had been destroyed at least twice, to find his faithful wife still waiting for him when he emerged. Princess Hiro Saga left the security and freedom of Japan to rejoin her long absent husband and, with the permission of premier Zhou En-lai, they made a home for themselves in Beijing, falling back into their roles as devoted husband and wife as if no time had elapsed at all. Princess Hiro Saga remained there at her husband's side until her death on June 20, 1987.

In 2003 a Japanese tv-movie told the story of her life and it is one of my sentimental favorites:

Posted by MadMonarchist at 12:38 AM