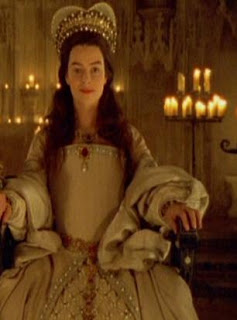 Annabelle Dowler as Queen Catherine of Aragon in the Channel 4 documentary "The Wives of Henry VIII" was a fast favorite with me. Dr. David Starkey presented this documentary based on his work on the Tudor women around Henry VIII and the filmmakers struck gold in casting Annabelle Dowler as Catherine of Aragon. Having studied Spanish and lived in Madrid for two years, she was able to be totally convincing as a Spanish princess brought to England. She also brought youth and beauty to a role that is usually seen as one of a rather plain, older woman who simply fusses and prays. Dowler shows us the real Catherine of Aragon, a strong and faithful woman who stood up to immense challenges. Dowler herself has quite a job in the film, meeting a variety of acting challenges. In the small scenes inherent in a documentary she effectively portrays the giddy excitement of a young girl about to be married, depression on the death of loved ones, coupled with shame when one loss is that of the child Henry so desperately wants, a proud mother instructing her daughter, a pious Catholic in prayer, an in-control Queen ruling England in the absence of her husband during a time of crisis and fighting for her marriage and her daughter when Henry tries to cast her aside. There are so many various emotions and situations she has to master and she does them all very well. Because of how her life with Henry VIII ended people too often view Catherine as generally unappealing, but Annabelle Dowler shows her as I have always seen her: the ideal woman, wife and queen.
Posted by MadMonarchist at 12:24 AM