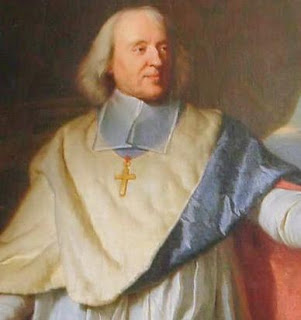 I am back from my little hiatus, a little earlier than expected but still just as deranged. I wanted to take a moment for a short look at the difference between absolute and arbitrary monarchy. First let me say that as a plain and simple monarchist I support all monarchies whether symbolic, limited or absolute, however, I stress the difference between absolute and arbitrary. The best explanation for this I have found was given by one of my heroes; the great French monarchist Bishop Jacques Bossuet who wrote "Politics Taken from the Very Words of Sacred Scripture" which is a must-read for all Christian monarchists in my opinion. Bishop Bossuet was considered one of the greatest preachers of all time and was a most eloquent and learned man.

Bossuet is most known as an advocate and defender (from a religious standpoint) of absolute monarchy at the court of that most famous of western absolute monarchs; Louis XIV. However, Bossuet pointed out that an absolute monarchy need not and should not be an arbitrary monarch. To him, absolute monarchy simply meant that the position of the king was divinely ordained and sacrosanct yet the person of the king himself could be criticized and Bossuet himself often reprimanded Louis XIV for his irregular private life. He said that the power of the King had to be absolute in order for him to be able to do good and suppress evil, so that he could carry out the duties he was charged with and could not be pressured or manipulated by any. At the same time though, his power could not be arbitrary. In other words, the monarch could not do anything and everything but was restricted by established tradition, organized religion and so on. To put it another way, a monarch should have all the power he needs to do his duty which is absolute and cannot be challenged but not the power to do absolutely anything he wishes.
Posted by MadMonarchist at 1:35 AM