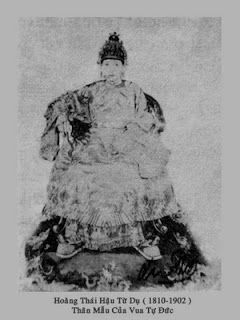 One of the most long-term influential figures in the history of the Nguyen dynasty of Vietnam was the Grand Empress Dowager Tu Du. She was born Pham Thi Hang at Ben Tre on June 20, 1810 to Justice Minister Pham Dang Hung. In 1824 she became the second wife of Emperor Theiu Tri whose first wife, Dinh Thi Hanh, was her aunt. She was raised to the status of Empress Dowager in 1847 when her son became Emperor Tu Duc. Tu Duc was the longest reigning Emperor of the Nguyen Dynasty (1847-1883) and as in all Confucian societies Empress Tu Du was the most powerful woman at court during that time but her influence would only grow with time due to the fact that Tu Duc was unable to have children because of a childhood bout with smallpox. So, despite of having 103 of the most beautiful women in Vietnam for his wives and concubines he had to adopt 3 nephews to be his successors. Still, a crisis ensued after his death.

Empress Tu Duc oversaw the selection of Nguyen Duc Duc as heir to the throne but after a symbolic reign of only 3 days he was removed and later killed. This made many understandably reluctant to assume the Golden Throne but Empress Tu Du persuaded Hiep Hoa to become the next Emperor. However, he was caught between the French on one side and the regents on the other. He gave in to the French only to be forced to kill himself by the regents only 3 months after ascending the throne. She oversaw the short-reign of his successor Kien Phuc who was likely also poisoned at which time the throne passed to Emperor Ham Nghi. In 1885 the regents took the young Ham Nghi to lead an anti-French uprising in the mountains. Tu Du and the other dowager queens first accompanied the group but stopped not far from Hue and in a crucial decision decided to return and see Dong Khanh enthroned as the new Emperor.

Empress Dowager Tu Du remained a powerful force inside the Forbidden City during the short reign of Dong Khanh who was often ill. Upon his death it was decided by the French that the throne should not pass to his son but to Emperor Thanh Thai (son of Nguyen Duc Duc). Despite being 80-years-old the Grand Empress Dowager Tu Du was still the most powerful person inside the "Great Within" and it was she who dealt with the French when Thanh Thai began to exhibit increasingly bizarre behavior in an attempt to keep him in line. When things became serious enough for the Emperor to go on an "enforced vacation" it was Tu Du who held the reigns of power in his absence. Her unqiue and unprecedented life came to an end on May 22, 1901 in the Forbidden City. It is safe to say that no other woman in modern Vietnamese history has had as much influence for so long a period as Grand Empress Dowager Tu Du.
Posted by MadMonarchist at 12:08 AM