Take Me Out to the Ball Game... 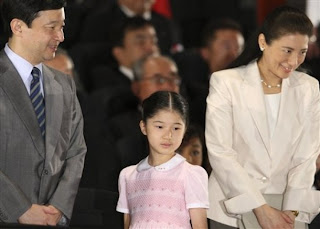 Last month, the Japanese Imperial Crown Princely family took in a baseball game. It's been a while since catching a glimpse of them, especially HIH Princess Aiko, who is becoming quite the adorable young lady. Looks like the spitting image of the Crown Prince to me. In related news, those pushing to bring the Olympic games to Tokyo in 2016 have said they hope to have Crown Prince Naruhito and Crown Princess Masako on hand at the IOC general meeting in Copenhagen. The Japan Times says the Olympic committee is talking to the Imperial Household Agency about this issue.
Posted by MadMonarchist at 9:39 AM

Email ThisBlogThis!Share to TwitterShare to FacebookShare to Pinterest
Labels: Japan