In Memory of Bob Novak 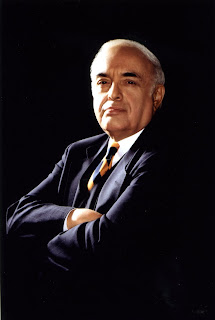 Yesterday the United States lost one of its great conservatives; Mr Robert Novak. Though it might be a touch out of place, I think he deserves a mention. Bob Novak came from a Jewish family and he did have some monarchist ancestry as his family patriarch was an officer in the Imperial Russian Army. An only child, and perhaps a bit spoiled, his girl cousins took to calling him the little baby Jesus because of the way he was fussed over. His goal in life was to be a great reporter and he certainly accomplished that. From his days writing for Evans & Novak to his time on the pundit shows he always remained a great reporter who delivered the facts; without spin or editorializing. He was, however, a great conservative. He became a passionate supporter of the pro-life movement and when he decided to start taking religion seriously he looked for the most pro-life, anti-abortion church in DC he could find. He converted and became a Roman Catholic, keeping on his desk in every office a picture of St Thomas More. If some may be inclined against Mr Novak, let me just say that anyone who could work a flaming liberal like the "Ragin' Cajun" James Carville into such a foaming frenzy on a daily basis is worthy of some respect for that alone. Novak pulled no punches and played no favorites even when that meant falling out with the GOP establishment from time to time such as when he adamantly opposed the latest war in Iraq. In any event, I will not go on, Bob Novak was a great reporter, a great traditional conservative and he will be missed. RIP Bob Novak.

Posted by MadMonarchist at 3:25 PM