Solemnity of the Sacred Heart 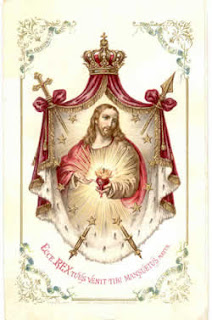 Yesterday the Roman Catholic Church celebrated the Feast of the Sacred Heart of Jesus. This was an ancient Christian devotion but one revived and popularized by the French visionary St Margaret Marie Alacoque and from the very beginning had a very strong connection with monarchy and more than possibly any other devotion came to be associated with counterrevolution and Catholic monarchy. When St Margaret Marie had the visions of the Sacred Heart of Jesus she actually went to King Louis XIV of France to ask him to emblazon the image on his coat of arms; which he did not do. When the Revolution came to France, and barbaric, atheistic republicanism with it, the loyal Catholic monarchists who rose up against the revolutionary regime wore the Sacred Heart as their badge and this was often their only item of uniform.
Perhaps because of this, the Sacred Heart became a very common symbol in royalist and counterrevolutionary movements across the world. Even in the 20th Century, when Catholic traditionalists in Mexico rose up against persecution the Sacred Heart was one of their most prominent symbols. It was also extremely widespread in Spain among the Catholic monarchists in the Carlists wars it was very common and in the Spanish Civil War amongst the Carlist and some of the nationalists the Sacred Heart was everywhere; on flags, banners, badges and even carved or painted onto rifles and military vehicles. The Solemnity of the Sacred Heart was instituted by Blessed Pope Pius IX who was a great defender of monarchy, an enemy of revolutionary republicanism and was the last papal monarch prior to the signing of the Lateran Treaty with Italy.
Monarchists and Catholic monarchists in particular of course, should be on the lookout for images of the Sacred Heart. If you see someone wearing a Sacred Heart medal or badge; they just might be on your side!
Posted by MadMonarchist at 2:53 AM