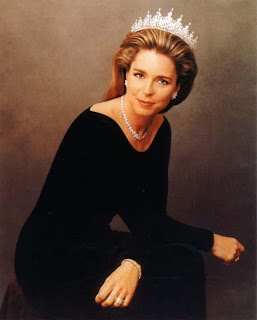 One of the most fascinating royals of the modern Middle East, and certainly one who has brought a great deal of American attention to the monarchial life of the area is the Dowager Queen Noor of Jordan. She was born Lisa Najeeb Halaby on August 23, 1951 in Washington DC. Her father was an official in the defense department under President Harry Truman and led the FAA under President Kennedy as well as serving as CEO of Pan-Am Airways. Through her parents she has ancestry from Britain, Sweden and the Syrian population of Lebanon. Little Lisa grew up in the United States and was educated in New York and Massachusetts at the best schools. After graduating from Princeton in 1974 she moved to Australia for a time before taking a job with a British company doing remodeling work in Tehran where her degree in urban planning was put to good use.

In 1976 Lisa Halaby moved back to the US and, through her father, took a job in design with the Jordanian airlines. It was in this role that she first met HM King Hussein of Jordan while working on the plans for the Queen Alia International Airport. The King was still in mourning for the beloved Queen Alia (his late wife) but he and Lisa became good friends. Their relationship grew and in 1978 the two were engaged to be married. In the summer of that year King Hussein walked down the isle (so to speak) for the fourth time and made Lisa Halaby his wife and Queen of Jordan. She renounced her US citizenship, converted to Islam and took the name Noor al-Hussein. Not everyone in Jordan was delighted by their new queen consort whose background seemed so far removed from their own. In time she began to win them over with her care and concern for the Kingdom of Jordan.

As the new consort Queen Noor took over the upbringing of her stepchildren and between 1980 and 1986 gave King Hussein four more children; Prince Hamzah, Prince Hashim, Princess Iman and Princess Raiyah. It was a very happy family life for the royal couple but the same background of Queen Noor that brought her so much attention also brought criticism with some in Jordan viewing her as ‘too American’ and many in America viewing her as ‘too Jordanian’. Giving her opinion on political matters also upset some traditionalists and there were difficulties within the family over the succession as Queen Noor wished her son Prince Hamzah to be heir to the throne. Queen Noor was heartbroken when King Hussein died on February 7, 1999 and even more upset when her son was removed from the succession and the father-to-eldest son formula was adhered to.

As dowager Queen and stepmother to King Abdullah II, Queen Noor is in a rather unique position being neither consort nor queen mother. However, she has not been lacking in a role to fill. She was worked extensively in improving western-middle eastern relations, conflict resolution and numerous charitable activities. She has often worked with the UN in these areas and formed the Noor Al Hussein Foundation to fight poverty, promote the rights of women, small business, health care, environmentalism and cultural exchanges. She has been invited by world leaders and traveled across the globe to trouble spots for peace talks and humanitarian efforts. Most recently she has been leading a (noble but probably naïve) effort to see the total abolition of nuclear weapons. She currently lives in Jordan, Washington DC and London as she travels to meet her extensive speaking schedule.
Posted by MadMonarchist at 1:03 AM