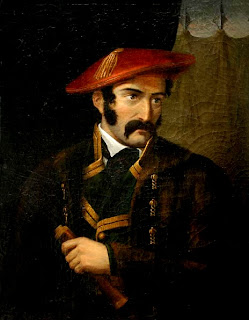 Tomas de Zumalacarregui y de Imaz was a controversial figure, and remains so, though none could deny his zeal or ability. His inclusion here may be questioned by virtue of the fact that this adamantly monarchist soldier came to fame in a civil war, not between monarchists and republicans, but between rival royal claimants (always sad when that happens). I speak of course of the Carlist wars in Spain and Zumalacarregui stands out as being a great military leader for the Carlist forces who were ordinarily lacking in that regard. He was a Basque born in 1788, the son of a lawyer. His first military experience came with the invasion of Spain by the French forces of Napoleon Bonaparte. He joined the Spanish Royal Army, saw combat at Tudela and was eventually taken prisoner. Managing to escape, he saw about his family and promptly joined the guerillas fighting the French occupiers.

As a member of irregular forces Zumalacarregui stood out for his firm principles. More of the strong, silent type he was a devoutly religious man who fought for independence and the most noble traditions of the Catholic Kingdom of Spain. As soon as possible he rejoined the regular Spanish army and became an officer. He proved his natural ability on the battlefield, was promoted to captain and once King Ferdinand VII was restored to his throne Zumalacarregui worked to even out his military experience with studying the art of war in books. He was staunchly royalist and was disgusted by the spread of liberalism throughout Spain following the French occupation. When the 1820 Revolution erupted liberal officers betrayed him to the revolutionary government as a reactionary but the Basque captain was not removed. Yet, when the government found out he was organizing royalists they did act and he was forced to go into exile in France.

He returned from France in 1823 with other Spanish royalists to restore the power of King Ferdinand VII and he was promoted to lieutenant colonel in 1825 and colonel in 1829 for his courage and proven steadfast loyalty to the Crown. However, as the King determined to make his daughter his heir without bothering about the law and traditions of Spain Zumalacarregui, who had fought for Ferdinand VII all is life, was known to be opposed to this and supportive of the succession of the King’s brother Don Carlos. Uprisings on behalf of Don Carlos began as soon as the King died and his daughter was proclaimed Queen Isabella II by the more liberal faction directed by her mother Queen Maria Cristina. However, the pious soldier held back, naturally hesitant to take up arms against his countrymen.

The Carlists suffered a number of setbacks before Don Carlos (King Carlos V to his supporters) named him commander of Navarre and Zumalacarregui answered the call and joined the Carlist forces fighting for the traditional Catholic Kingdom of Spain that he held most dear. Under his leadership the Carlists stopped being simple dissidents and took on the form of a regular military force. He trained his men, instilled discipline and self-confidence and proved a very adept and resourceful commander, arming and supplying his army almost exclusively from materials captured from the enemy (known as Cristinos). He was also a very honorable man who did away with executions while his enemies often had Carlist prisoners executed by firing squad. His experience during the French occupation paid dividends and he proved a master of unconventional warfare.

Battle after battle was won by Zumalacarregui and his troops adored him for his skill that gave them victory, his religious faith that inspired them and his concern for their welfare. The top command, however, did not make the best use of him partly due to fears of his being too popular and a potential threat. Their fears were entirely misplaced as there was no one more loyal and less ambitious that the stern, quiet Basque general. By 1835 he had secured most of northern Spain for the Carlist cause, commanded an army of over 30,000 men and for the first time gave Carlos V a military rated better than that of the Queen-regent. He wanted to march at once on Madrid to see Carlos V properly installed as King but he was overruled and ordered to attack Bilbao on the north coast in his native country. While besieging the port he was wounded in the leg and died on June 24, 1835.

His death was controversial with many claiming that if his English doctor could have treated him rather than the surgeons sent by Don Carlos he would have lived or that the war could have been one if he had been allowed to march on Madrid instead of being diverted to the coast. What few could dispute is that the Carlists would never have the benefit of another general of quite the same calibre as Zumalacarregui who was the complete package of reserved demeanor, heartfelt patriotism, deep faith, honorable principles, courage, skill and resourceful military talent who could command the hearts as well as the obedience of his men. Even the most bitter enemies of the Carlist movement would be hard pressed to say anything negative about this great and upstanding Spanish monarchist.
Posted by MadMonarchist at 1:05 AM