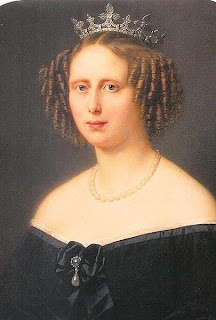 Queen Sophie, consort of King Willem III of the Netherlands, was born in Stuttgart on June 17, 1818 to King Wilhelm I of Wurttemberg and Grand Duchess Catherine Pavlovna of Russia who was the daughter of Czar Paul I. She died shortly after Sophie’s birth and Sophie was raised by her aunt Catharina, wife of Jerome Bonaparte, one-time King of Westphalia. In the aftermath of being raised to the status of a kingdom during the Napoleonic Wars the Royal Family of Wurttemberg were anxious to further establish themselves through dynastic alliances with the major houses of Europe. Marriage ties were made to the British Royal Family and King Otto of Greece and Duke Wilhelm of Brunswick were considered as potential husbands for her. However, her father King Wilhelm I did not consider Greece stable enough for the investment of his daughter.

Instead, previous marital ties were reinforced. Sophie’s aunt, Anna Pavlovna, had been married to King Willem II of the Netherlands and she was betrothed to their son; Willem III, Prince of Orange. The two first cousins were married in Stuttgart on June 18, 1839. She was a very intelligent, driven young woman and her family (along with several other observers) expected that she would ultimately be the dominating force in the Netherlands once her husband came to the throne. However, Willem III was already dominated by his Russian mother. Surprisingly enough she had been against her son marrying her niece and she opposed her from day one. This did nothing to help the marriage of two people who were almost polar opposites to begin with.

The new Prince and Princess of Orange did their duty and produced a son and heir in 1840, followed by another son in 1843. In 1849, with the passing of Willem II, the couple became King Willem III and Queen Sophie of the Netherlands. Willem III was a reluctant monarch but, coming from a military background, expected to be obeyed without question and had a volatile temper. Queen Sophie, on the other hand, was considered liberal by the standards of the day and while she was well educated and gloried in learning, particularly history. Perhaps resenting a wife most considered smarter than him, Willem III tried to forbid intellectual pursuits at his court. In 1851 the couple had their last child, another son, but it soon became clear their marriage existed in name only as Willem III became infamous for his adultery with his reputation for debauchery even reaching the United States.

The Queen was tormented by this and in time the affairs and bursts of temper on the part of King Willem III drove Queen Sophie to publicly denounce him as an unfit monarch. She said she could better rule the country and that may have been true but it was not about to happen and the undermining of Willem III did not make anything better. Their standoff came to its worst point in 1850 with the death of their son Prince Maurits. He suffered from meningitis and Queen Sophie wanted to call in more doctors to care for him but Willem III dismissed the idea that it was anything serious and refused to allow it. Five years later Queen Sophie managed to live apart from her husband, at least during the summer months and spent greater amounts of time back in Wurttemberg.

Queen Sophie tried to carry on as a traditional consort but it was extremely difficult for her. She corresponded with more moderate monarchs like Queen Victoria of Britain and Emperor Napoleon III of France as well as leading scholars and thinkers from around Europe but her husband disapproved. She was a patron of the arts, a leader in promoting the ethical treatment of animals and she sponsored a number of charities and construction of public parks. Still, she was lonely, unhappy and viewed her husband as a simplistic autocrat. When she died on June 3, 1877 she was, according to her final wishes, buried in her wedding dress as she had long considered that occasion to be the real end of her life. The King did not mourn her much and many people tended to view the intellectual German lady as aloof and withdrawn while Willem III was generally popular with the Dutch public for his simple, unassuming ways. Yet, at the very least, Queen Sophie can be judged as a royal ahead of her time and even in her own time she was widely respected and sympathized with across western Europe.
Posted by MadMonarchist at 1:02 AM