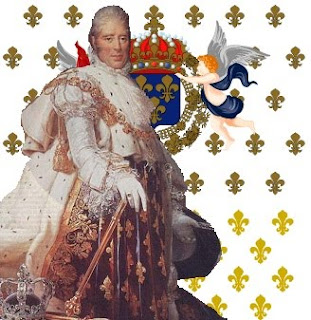 Surely one of the most staunchly monarchist of all monarchs was His Most Christian Majesty King Charles X of France. As the younger brother of King Louis XVIII and the martyred King Louis XVI he had first-hand knowledge of what horrors revolutionary republicanism could bring. Yet, his reaction to those events, before and during his rule of France, caused controversy. He was determined, possibly more than any other post-revolutionary French monarch, to see the horror that was the French Republic totally expunged from national life and to return, in fact and in spirit, to the ancien regime that had preceded it. That alone would be sufficient to make him one of my favorite Kings of France.

He was born Prince Charles Philippe of France on October 9, 1757 the youngest son of the Dauphin Louis Ferdinand and the Dauphine Marie Josephe at the Palace of Versailles. When he was born his grandfather King Louis XV bestowed on him the title of ‘Count of Artois’. He learned that tragedy would be a part of his life at an early age with the loss of his father in 1765 and the loss of his mother in 1767 when he was only 9-years-old. He grew up in the care of others and in 1773 married Princess Marie Therese of Savoy and in 1775 welcomed his first child into the world; Prince Louis-Antoine, Duc d’Angoulême. In 1778 he had another son, Prince Charles Ferdinand, Duc d’Berry.

Charles was a very handsome man with a reputation for being something of a playboy. In time this extended to accusations of an affair with his sister-in-law Queen Marie Antoinette. This was certainly not true although the two were good friends who shared a love for the theatre. Still there were plenty of problems for Charles. He had money problems and a relative (Prince Louis Philippe, Duc d’Orleans) who was plotting against him but the misfortunes of his country overtook his own. Prince Charles boldly advocated taxing the aristocracy (but not taking away their power) to save France from financial disaster. He opposed giving more power to the Third Estate, fearing (rightly so) that it would spiral out of control and for this the same people who called him a traitor to his class for supporting the taxation of the nobility then accused him of being ‘more royalist than the King’.

When the revolution came Charles left France (on orders from his brother) and set to work plotting a counter-revolution until a letter from Queen Marie Antoinette halted the plan, at least for the moment. When the King and Queen were subsequently arrested he called for an invasion of France with other prominent exiles to restore the Bourbon monarchy. While Prussia and Austria made war plans and the King and Queen were murdered Charles went to Britain where King George III gave him asylum. In 1814 he returned to France with royalist forces and after the fall of Napoleon briefly held power until the return of his brother King Louis XVIII.

Having resumed a high place in France he was less than enthusiastic about the comparatively liberal constitution his brother enacted at the behest of the Allied powers. He thought Louis XVIII not royalist enough while the King thought Charles too reactionary and liable to provoke another revolution. In 1820 personal disaster struck Charles when his son and heir, the Duc d’Berry, was assassinated at the opera. However, the wife of the young man was pregnant and safely delivered a son so the succession remained secure for the foreseeable future. Not long after, in 1824, Louis XVIII died and his brother succeeded him as King Charles X. His reign was to be pivotal; France would either be a traditional monarchy or a revolutionary republic, for Charles X there was no middle ground.

Immediately King Charles X began returning the traditional powers of the nobility and the Church. The following year, going back to time-honored French tradition again, Charles X was anointed with the Holy Oil of Clovis at the Cathedral of Rheims. He saw the stability of his reign as being built on the aristocracy and the Catholic Church. He put his friend Jules de Polignac in charge of the government and instead of waging war against other Christian nations as the revolutionaries had done, he turned his foreign policy against the Muslim raiders in the Mediterranean which led, in 1830, to the French conquest of Algeria, a territory France held until the 20th Century.

However, despite the best efforts of King Charles X the revolutionary fever in France had not been completely cured and as his enemies stirred up opposition against him instability increased. There were the usual calls for reform but Charles X had seen his brother give in to the reformers and die for it; he would not submit, famously saying that he would rather spend his days sawing wood than reign as a constitutional monarch in the British fashion. To his way of thinking the revolution, and everything connected with it, had to be rejected and shunned. Unfortunately, there were enough in the country who did not see things that way and the result was a suspension of the government which led to the outbreak of the July Revolution. Chaos reigned in the streets but Charles would not give in and so, more liberal but less radical minds called on Louis Philippe, the Duc d’Orleans, to take the throne.

Quickly trapped by riotous mobs the King decided that he would abdicate in favor of his grandson on August 2 but nonetheless a week later Louis Philippe was declared “King of the French” by the Chamber of Deputies in what was to be a royal-revolutionary hybrid regime. The young King Henri V was ignored and Charles X, with his family, was forced by a murderous mob to go into exile in England where they were met by crowds waving the revolutionary tricolor. Charles remained in uneasy exile in Britain until 1832 when Emperor Francis I of Austria offered him a palace in Prague. He spent the rest of his life in the Hapsburg dominions and died in Austria on November 6, 1836 upholding the rights of his family line and the cause of the traditional Kingdom of France to the very end.
Posted by MadMonarchist at 12:23 AM