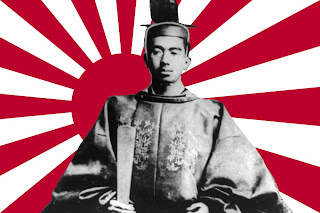 The late Showa Emperor of Japan, Hirohito, was the longest reigning monarch in modern Japanese history and one of the most controversial. His reign saw the peak of Japanese power as well as the greatest devastation the country has ever suffered and was a turning point in history, the end of one era and the beginning of another. He was born on April 29, 1901 at the Aoyama Palace in Tokyo to Crown Prince Yoshihito and Crown Princess Sadako of Japan and was given the name and title of Prince Michi. His grandfather, the Meiji Emperor, died in 1912 and his father became Emperor Taisho of Japan. In 1916 he was formally named Crown Prince. He was given a mix of traditional and modern western education during his childhood and as a young man was the first Japanese royal to travel overseas to make Japan more visible on the world stage and strengthen foreign relations. For six months he traveled the world visiting Great Britain, the Netherlands, Belgium, France and Italy.

In 1921 Crown Prince Hirohito was named regent of the Empire of Japan due to the failing mental faculties of his father. Numerous political and diplomatic events of great significance happened during these years but perhaps none were to have such a far-reaching impact as the ending of the Anglo-Japanese alliance. This was done by Britain to placate the United States, Britain gambling that American friendship would be more beneficial than Japanese friendship. The leadership in Japan took it as an insult and tantamount to a betrayal. The course of history would show that America had no great love for defending the British Empire and making an enemy of Japan left all of the east Asian holdings of Great Britain vulnerable to a rising Japan. The Japanese were further angered by numerous treaties that followed aimed at limiting their naval power in comparison to the other major powers.

Nonetheless, from the time of his youth when the alliance was intact, Hirohito had been greatly impressed by the British, an island nation like Japan, which ruled a vast empire and which was based on a monarch that reigned but did not rule. This basic system would be one Hirohito held to throughout his time on the Chrysanthemum throne. In 1924 he married his distant cousin Princess Nagako Kuni and the two eventually had a large family of five girls and two boys though not all long survived. In 1926 the Taisho Emperor died and Hirohito formally became the Emperor of Japan with the era name of Showa (“Enlightened Peace”). However, this was not to be a time of political peace for Japan which was still struggling to modernize, industrialize and, to some extent, westernize while at the same time fighting to maintain their traditional culture and values against subversive new threats from abroad.

The Depression hit Japan especially hard. There were too many mouths to feed, too few raw materials to feed the new industrialization and many feared losing their own identity in the flood of foreign trends and ideas sweeping Japan. Governments rose and fell rapidly and the Showa Emperor himself was nearly assassinated by a Korean dissident in 1932. Amidst all of the tumult it was the military and the spiritual-political symbol of the divine Emperor that alone seemed capable of uniting the country, providing stability and a path to overcoming the current problems to achieve a vision of greatness for the Japanese Empire. Many have since come to view the Showa Emperor as complicit in the military takeover but such is not the case. When military officers tried to take power in a coup the Emperor ordered a crackdown and threatened to take charge of the troops himself to suppress them.

The Emperor did, however, like most Japanese at the time, realize that they needed secure sources of raw materials to feed their economic recovery and overseas expansion was the way to accomplish this. It was the way every other great power operated and what they had all been doing for centuries; why should Japan be left out? The Emperor did not object to the takeover of Manchuria and he was genuinely kind and supportive when meeting with the last Emperor of China who was placed on the Manchu throne. He had a more clear grasp on world affairs than he is often given credit for. He sympathized with the plight of his fellow monarch, did not look kindly on the corrupt and chaotic Republic of China and viewed the USSR as a terror. Yet, he was not a part of running the government or the military which, especially in China, often acted on its own with its own agenda quite apart from Tokyo.

Unlike many high-ranking Japanese the Showa Emperor did not welcome the alliance with Italy and especially Nazi Germany. It was only after the Axis forces in Europe seemed to have the war all but won that he finally, reluctantly, consented to the idea of Japan being partners with Germany and Italy. When his military came to him with the plan for war against the USA he was deeply troubled and doubted their grandiose aims could be accomplished, noting that they had not totally pacified China in the time promised and that the Pacific was considerably larger than China. Breaking with tradition, he shocked his council by addressing them directly about his wish for a peaceful solution to the problems Japan was facing but this did not stop the drive to war. He issued the declaration of war against the US and UK but was still concerned about how this conflict was carried out.

After the stunning success at Pearl Harbor the Emperor again broke tradition by directly questioning the flight commander, Mitsuo Fuchida, whether any civilian areas had been hit in the bombing (they were not). This was a great concern to him and the attacking forces had been told repeatedly that only military units and installations were to be targeted. Throughout the rest of the war the Emperor did what he could to boost morale and give helpful advice. Given the behavior of the military on certain occasions this is often made to seem sinister but it should not be considered outrageous that the Emperor of Japan wanted his country to be victorious. When it became clear that Japan would lose the war he was not the first to face this fact nor was he the last and when he determined that the time had come to negotiate an end to the war he was opposed at every turn.

After two atomic bombs were dropped on Japan there could be no more delay. Facing the threat of nuclear annihilation the Emperor took decisive action to order the surrender to save his country. He recorded an announcement that had to be smuggled out of the palace to the radio station because of an uprising by the military which was intent on fighting on to the death. The first time the Japanese people ever heard the voice of their divine Emperor was when the message came over the radio announcing the surrender. Japan would, as the Emperor said, “bear the unbearable”. For a country that had not known defeat in centuries and which had never been conquered by an outside force, his sentiments were sincere and correct. Japan surrendered, officially unconditionally, but with the assurance of the US that the fate of the Emperor would rest in the hands of the Japanese people who revered him.

Many in the US and other Allied countries wanted the Emperor put on trial for war crimes; holding him responsible for all actions of the military who all served in his name. However, General Douglas MacArthur, commander of the Allied occupation forces, was adamant that the Emperor had to be kept in place. His status was diminished and he was forced to renounce his divinity but he was a symbol of such great importance that MacArthur feared Japanese society would come apart if he was removed. Instead, the Emperor would henceforth be the “symbol of the state” with no political power or role. Emperor Showa had to reinvent himself as a modern, more western-style “people’s monarch”. He tried to make the occupation and the unprecedented changes Japan was going through at breakneck speed go as smoothly as possible.

Emperor Showa attempted to apologize for the misdeeds of Japanese forces during the war but was snubbed by MacArthur. He also refused to honor any war dead that included convicted war criminals. For the first time he visited the Japanese people and met them face to face -which took some getting used to for all concerned. He even visited the United States and was a crucial figure of tradition and stability during the tumultuous years that saw Japan change more radically and thoroughly that at any other time in her ancient history by far. After the longest reign in modern Japanese history Emperor Showa died on January 7, 1989 and was succeeded by his son HIH Crown Prince Akihito, the current Emperor of Japan. He was buried next to his father in the Imperial Mausoleum at Hachioji. His legacy has been debated ever since and he remains one of the most controversial as well as one of the most significant monarchs in Japanese history.
Posted by MadMonarchist at 12:42 AM