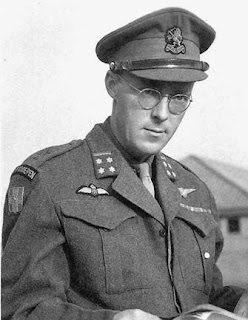 HRH Prince Bernhard of the Netherlands had a rather controversial life from the very start of his marriage to the future Queen Juliana of the Netherlands due to his German nationality. However, despite being born a Prince of Lippe-Biesterfeld, and having been a member of the Nazi Party as a matter of convenience, upon his marriage he became Dutch all the way and absolutely loyal to the Netherlands and the Royal House of Orange. At no time was this more thoroughly proven than during his service in World War II against the country he was born in.

Prince Bernhard played an active role in the war from the very start when the Germans bombed and invaded the Netherlands. He grabbed a machine gun, made a battle group out of the Dutch royal guards and led them in shooting at German airplanes. When the Dutch government and (reluctantly) the Queen went into exile in Great Britain Prince Bernhard initially refused to go, wishing to stay in Holland and fight on, however, he finally submitted to go to England and take charge of the Dutch military mission in London. He wanted to work with British Intelligence and the Navy and Allied high command. Some had misgivings about him because of his German background, but he was thoroughly investigated and King George VI of Great Britain recommended him and he was finally accepted into the inner circle.

The people back home in the Netherlands, however, had no such misgivings. Despite the controversy over his German nationality when he first married into the Dutch Royal Family, the Prince had proven whose side he was on and proven his loyalty to his new country and new people. On the first birthday of Prince Bernhard after the occupation, in a subtle act of defiance against the Nazi occupiers, Dutch people from all walks of life placed white carnations (the Prince’s favorite flower) at national monuments around the country in a show, not just of birthday wishes for the Prince, but a sign of loyalty to the House of Orange

The prince also expanded himself by training as a pilot in a British Spitfire with the Dutch squadron of the RAF and in 1941 was promoted to wing commander. He also flew bombing and reconnaissance missions over the Atlantic, France, Germany, Italy and so on for which he was decorated with the Dutch Flying Cross. Ultimately Queen Wilhelmina of the Netherlands promoted him to the rank of general and in 1944 was given command of the Dutch military forces. When the government-in-exile ordered a rail strike to stop supplies to the German army the Nazis retaliated by cutting off all food and fuel to the Netherlands. People were reduced to eating tulip bulbs and stripping abandoned houses for wood.

The original Allied invasion of the Netherlands (Operation Market Garden) failed (partly due to the dismissal of Dutch reports on the ground) with the crushing defeat at Arnhem followed by the movement of the main Allied effort to the southern front. Prince Bernhard was greatly concerned with the privations that prevailed in the Netherlands and he tried to persuade the Allies (principally the British) to organize a separate offensive north to liberate that part of Holland still under Nazi rule. Unfortunately, the outbreak of the Ardennes offensive in Belgium put a halt to all such ideas. Nonetheless, by 1944 Prince Bernhard had become the top commander of the Netherlands armed forces and returned with his family once the country had been liberated by the Allies. He was on hand for the negotiations and the formal surrender of the Nazi forces in 1945. When the Germans tried talking to Prince Bernhard he refused to speak in his native tongue, having become Dutch through and through.

After the war he was made Inspector General and did a great deal to encourage business and the rebuilding of the Dutch economy as well as taking on a leading role in the aircraft industry. In the years that followed he had his share of problems and controversies but was always honored for his service during the dark days of World War II. He lived to see his daughter Beatrix become Queen of the Netherlands and died in Utrecht at the age of 93 from cancer in 2004.
Posted by MadMonarchist at 12:24 AM