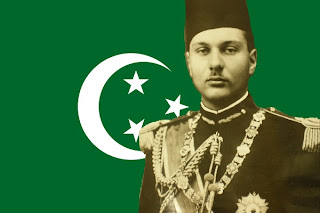 Recently the UK newspaper “The Guardian” (of all people) published an article about the revival in Egypt of interest in their Royal Family and former kingdom. Whereas in the old days the monarchy was condemned by the revolutionary radicals who seized Egypt and the former King and royals could only be spoken of with condemnation, things have been changing. Books on the old kingdom are flying off the shelves, visiting royals of the Mohammad Ali dynasty are hounded for interviews and while speaking supportively of the monarchy is still not something conducive to health and long life in Egypt, one can now at least speak of them without condemning them. It is entirely fitting that this should be so. The unfortunate King Farouk may have had his problems and shortcomings but, unlike some that came after him, he was not a cruel or oppressive leader and he represented a dynasty whose history has been bound up with Egypt for centuries.

Perhaps with the benefit of hindsight people will begin to look dispassionately on the revolution which saw the King of Egypt deposed and replaced by Gamal Abdel Nasser. Much of this stemmed from ties between the monarchy and the British and the loss of the 1948 war with Israel. However, the King was certainly not a subservient British lackey and when it comes to unsavory political ties Nasser has him beat in spades having tried to form an alliance with the Italian Fascists in World War II and during the war with Israel offering his first support to Grand Mufti Amin al-Husayni who had been very supportive of the Nazi regime during the war. He would, as dictator of Egypt, go on to support what he called “Arab socialism” and the republican government, if it has succeeded in nothing else, it has done so in bringing their country down to the gutter and robbing it of the grandeur and mystique it knew as a monarchy.
Because of the political situation in Egypt any open advocacy of monarchy is taboo. However, there are some groups on-line which, though they are careful to say that they are not pushing for a restoration, exist to keep alive the history and foster interest in the Egyptian monarchy. You can find such groups on sites like flickr and Facebook. You can also read the full article mentioned above at The Guardian.
Posted by MadMonarchist at 1:06 AM