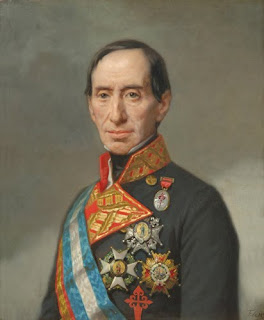 During the Revolutionary Wars in Latin America, one of the leading Spanish royalists was the Grandee of Spain Jose Manuel de Goyeneche y Barreda, Conde de Guaqui. However, unlike most of the high-ranking royalists he was not native to the Peninsula but was born in Arequipa in what was then the Viceroyalty of Peru on June 12, 1776 into an esteemed military family (on the paternal and maternal sides) who traced his ancestry all the way back to the original Spanish conquistadors. He was sent to Spain for most of his education and entered the army as a cadet, quickly earning promotion; first as a lieutenant of cavalry and later a captain of grenadiers. He gained prestige for his participation in the two Spanish victories over the British at Cadiz before being sent to Peru during the French invasion of 1808 to ensure loyalty to the newly enthroned King Ferdinand VII.

Back in South America Goyeneche had broad powers to arrest or execute anyone engaged in rebellion against the King of Spain and to remove from office any official, no matter how powerful, who did not recognize his authority. Viceroy Abascal named him Captain-General of the royalist forces in Peru and in 1809 dispatched him to put down the revolutionary forces at La Paz, Bolivia. In this task he was completely successful, suppressing the rebels and having the 12 top leaders of the revolt executed. After returning to Cusco he learned of the outbreak of the May Revolution in Buenos Aires, Argentina. When Bolivia again fell to revolutionary forces he moved south and signed a meaningless peace with the rebel leader Juan Jose Castelli. Both armies used the interlude to prepare for the upcoming campaign.

Castelli moved to violate the truce first, attempting to surround Goyeneche and his royalists but Goyeneche predicted such an event and attacked first and the result was a solid victory for the royalists on June 20, 1811 at the battle of Huaqui. Thanks to Goyeneche and this stunning victory the advance of the revolutionary forces had been stopped cold and the leaders in Argentina pulled back in a panic, hurriedly making preparations to keep their movement alive. The royalists advanced in the following weeks, re-taking all of Bolivia (Upper Peru at the time) for the King of Spain. In recognition of his great victory Goyeneche was enobled as the first Conde de Guaqui. However, the advance of the royalists was slowed by heavy and tenacious fighting in the Salta Province of north Argentina.

The rebels fought mercilessly, even arming women and children to shoot down the royalist soldiers. Progress was slow but Goyeneche was thorough and moved inexorably forward, dealing with the rebels with a ruthlessness equal to their own. When another rebel army (under the famous General Belgrano) threatened his position Goyeneche sent General Pio de Tristan to drive him back. Unfortunately for the royalists the result was a victory for the revolutionaries. Belgrano followed this up with another victory at Salta, taking Tristan prisoner (who later joined the independence movement) and exposing the southern flank of Goyeneche and his royalist forces. With no other option the general retreated and turned in his resignation. His command was given to General Joaquin de la Pezuela and Goyeneche left his homeland and returned to Spain.

Once back in Spain a grateful monarch named Goyeneche Lieutenant General of the Royal Armies, set him to work with others to develop plans for the reconquest of Latin America and made him a knight of the Military Order of Santiago. He was also elected to the Cortes. He died in Madrid on October 10, 1846 an honored figure in Spanish government and society.
Posted by MadMonarchist at 12:52 AM