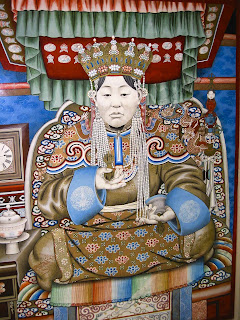 The first wife of the last Mongolian monarch was Empress Sharav Dondogdulam, also known as the Ekh Dagina. Like much of Mongolian history and historical figures, precise facts about her life are hard to pin down. Some sources give the date of her birth as sometime in 1870, the same year as her future husband, but others say it was later such as in 1874. Even the very nature of her existence is contested. One, more secular, version of her story is that she was born at Baldan Bereeven Khiid, Mongolia and lived a generally normal life for a Mongol girl until the Tibetan-born “Holy Shining One”, the Bogd Khan, married her and moved her into the Winter Palace. Others, however, insist that Empress Dondogdulam was not really human at all, but a divine being in human form (a fairly common Mongolian belief at the time and to a much lesser extent even still today). This was supposed to verified by the fact that the subject in question had no belly-button because they were not born to mortal parents. Whether or not the Empress had a belly-button is anybody’s guess I suppose.

Exactly what sort of consort the Ekh Dagina was is hard to acertain. The only sources which we have to go by are unreliable and contradictory. Some have portrayed her as a tragic figure, a victim of circumstance whose marriage to the Bogd Khan was something to endure rather than enjoy. My first response to that view is that most Mongolian wives even today would be viewed as tragic figures by women in the western world and although the Empress had her own hardships to endure, in a land where survival was often a struggle, she lived better than probably any other woman in the country. The “Holy Shining One” reportedly fell madly in love with her and this prompted a change in how things worked with the religious hierarchy perceiving that he was going to have Dondogdulam one way or another and better that he marry her than carry on an affair with an unofficial concubine. His attachment to her might discredit somewhat the idea that she was a figure to be pitied because of her husband. The history handed down by the communist stooges of the Soviet Union, on the other hand, portray her in the same unsavory fashion they portrayed her husband. Their accounts tell of an ambitious and scheming Empress who conspired against and assassinated nobles who might have been a threat to the theocratic monarchy. They even claim that she had the Mongolian prime minister poisoned in 1919.

On the opposite end of that spectrum we have the fact that she was extremely popular, even beloved, by the Mongolian people. She was not a very public figure and one might have thought the “Holy Shining One” renouncing his vows to marry would have made his wife a scandalous figure and yet that was not the way in Mongolia. The Empress was adored and revered by the public and it was maintained that she was the reincarnation of the goddess Tara. So, while her husband was the “living god of Urga” she was viewed as a living goddess herself and when her husband was formally enthroned as the Holy Emperor of Mongolia she too was hailed as the “Great Mother of the Country”. Long after her death in 1923 Mongolians flocked to a spring where the Empress used to go to worship believing that it had healing powers because of her association with the site. Of all the incomplete and contradictory information existing about the Ekh Dagina, that level of devotion may be the most revealing and most accurate measure of her life as the last Mongol empress but one.
Posted by MadMonarchist at 12:32 AM