Belgian King in the Congo 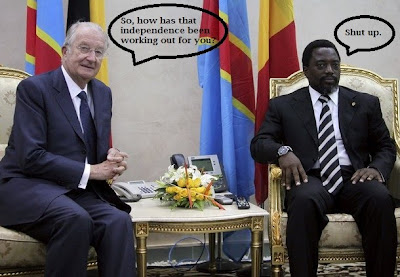 Today is independence day in the Congo and a couple days ago HM King Albert II of the Belgians arrived to participate in the festivities of the former Belgian colony. The trip has been controversial since the first mention of it. Relations being somewhat rough between the two countries as of late there was doubt as to whether or not the King would attend or even whether or not it would be safe for him to do so. There were many protests; some by those who never tire of dragging up ugly memories from the colonial days and trying to blame the current generation for past misdeeds and by those who did not want the Belgian monarch to give any attention to what is, by many accounts, a government that continues to preside over rampant corruption, crime and so on.

Their Majesties King Albert II and Queen Paola arrived Monday in the capital city formerly known as Leopoldville (in honor of Belgian King Leopold II) and were reportedly greeted by a crowd of well-wishers, which is good to hear, but nothing was said about how big these crowds were. Because so much hatred and hysteria has been drummed up over Belgium and the Congo the entire trip seemed to be like walking on egg shells and it was finally decided that the King would make no public speeches or statements at all. In the end, his silence may speak more truth than any words from him ever could. I cannot help but think about the day 50 years ago when the Belgian King Baudouin came to the Congo to officially hand over the independence of the country to the new republican government.

It has become very popular and fashionable in recent decades to harp about the many evils of colonialism and even 50 years ago many were offended by the speech that King Baudouin gave, but he was speaking the truth and it took courage for him to say some things that many would have rather ignored. What stays in my mind the most was his warning to the new republic that with independence comes great responsibility. This is something that has been sorely lacking, not only in the Congo but in countries and a great many formerly colonial countries particularly. In the Congo, Belgium was blamed for keeping them under colonial rule and when independence was granted and the Belgians went home they were blamed for pulling out too quickly and leaving things a mess.

That blame game has been going on ever since, even when foreign countries contribute money to ease the suffering the local republican government has imposed on its people these countries are blamed for not giving enough. Even when they send troops to stop warring factions, fighting for power in the “Democratic Republic” and murdering innocents along the way, these other countries are blamed for not doing enough. No matter what the problem, it is never the fault of the populace or the government but rather is invariably the fault of some foreign country or countries that is keeping them in misery. This does, of course, help the elites in power to stay there when they are never responsible for the problems the people are facing. In the same way this ‘victim mentality’ only makes it that much harder for the people to act responsibly and take charge of their own lives.

King Albert II reigns over a country that certainly has its own share of problems but people are not starving, crime is not out of control, the system of government is not broken down and the people are not killing each other. The Kingdom of Belgium is, on the whole, a free, stable and peaceful country and an all around wonderful place. On the other hand, the Democratic Republic of the Congo contains a population still largely in misery, plagued by corruption, civil wars, exploitation and crime. They are presided over by a president, Joseph Kabila, who was once the general of an “army” of children with machine guns, a man who was trained by the Communist Chinese, a socialist who came to power after the previous president was assassinated, has had to put down efforts to overthrow him and whose only election is widely considered suspect. It may be popular and convenient to point to the bad aspects of colonialism but the simple fact is that independence and the adoption of the republican government in the Congo has not brought the freedom and prosperity that was promised. Now, 50 years later, things are no better than they were before and in some ways much worse.

These are sad facts and it is also sad that so many would rather worsen the situation than face reality. It is also, unfortunately, a situation that is far from uncommon across the formerly colonial nations of the world. If anyone dares say anything about it, you will be branded a villain. Yet, as I said at the beginning, King Albert II will not be saying anything and does not really need to. A simple look around at the current situation should tell everyone all that they need to know.
Posted by MadMonarchist at 12:08 AM