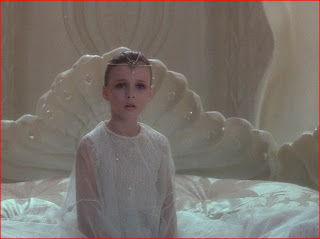 I have never been a big fan of the “fantasy” movie genre (may the Tolkien fans forgive me) but one of my favorite books as a youth was (and remains) “The Neverending Story” by German author Michael Ende. This was made into a pretty good movie which was followed by a fairly stinky sequel (with no disrespect to the late Jonathan Brandis, God bless you) and then a third, little-seen sequel that stunk so bad I’ve never been able to get close enough to watch it. Ende did not like the first film, and it did stray a good deal from his book, but I liked it overall and, to be fair, much of what is in the book could simply not have been done with the special effects technology available in the 80’s. In the film she was portrayed by child actress Tami Stronach, a Scottish-Israeli girl born in Iran. Incidentally, it was the fall of the Shah and Iranian Revolution which forced her archaeologist parents to flee Iran.

In the movie the Childlike Empress appears only at the very end in the climactic scene but little Stronach has to do some heavy-duty acting in that one scene and I think she did very well (it was her only film role as her parents did not want her going down the usually tragic route of child actors). In the book her character is much more prominent and her position as the Empress of Fantasia (Phantasien/Fantastica in the book) in the novel and displays qualities that Ende surely picked up while living in Japan. In the book it is explained that the Childlike Empress does not really hold political power (there being really no government) nor does she have laws or armies to protect her as no one would think of attacking her because the very existence of her subjects is bound up in her own and she accepts all of her subjects as they are, good or bad -a very Buddhist sort of outlook one might say (though I will add, overall at the end of the book has very Christian themes). This at least appears to change in the book but I will try to stick with the film as much as possible here.

As stated, the Empress and her realm are one and just as the various creatures of Fantasia could not live without her, so too when the land of human fantasy is threatened by “the Nothing” the Empress becomes deathly ill. This gets the story going as a young warrior (Atreyu aka the kid from Battlestar Galactica for 70’s folks) is chosen to embark on a quest to find a cure for the Empress to restore her health and save Fantasia from “the Nothing” which is a vast and growing empty void caused, we are led to understand, by a growing lack of human imagination born of hopelessness. The young warrior returns finally to the Ivory Tower (home of the Empress) at the end of the movie thinking he had utterly failed only to have his young monarch (who in the book is referred to as ‘the Golden Eyed Commander of Wishes’) that he has not.

We see a glimpse of the larger story; that it is the Childlike Empress alone who sees the bigger picture, she knows what will cure her but the adventure was necessary to captivate the attention of the young boy reading the book in which their story is written who is to be her salvation; simply by giving her a name. This is true to the book, though for some reason in the movie they seem to imply that the young reader (one Bastian Balthazar Bux) chooses the name of his late mother for the Empress though the book says no such thing. The name he finally shouts out is the same as that in the book (“Moonchild”) but would seem a rather absurd name unless the mother was the daughter of a couple of 1960’s Deadheads or something.

Just in case there are some who have not yet seen the film I will try not to give too much away, but the young Tami Stronach really shines in her short but pivotal scene and with only a few lines is called on to convey a range of emotions from sympathy, amusement, severity, fear, urgency, abject terror, sadness and reassuring calm. I’m no acting expert but that would seem a rather tall order for such a young child actress; nonetheless she plays the part to perfection. For those not put off by the genre I would say the movie is definitely worth a look (or a second one if you’ve seen it already) but more as a prelude to reading the book in which you get the full story and a much more deep, meaningful, insightful and satisfying one at that. I am, as stated, not a fan of the genre but I have a soft spot for the movie and the book remains one of my favorites. Many years ago when I was in school I had a replica of the emblem of the Empress made and would occasionally get comments (always good ones) from those my age who remembered it from their childhood. I might have to go find it again…
Posted by MadMonarchist at 12:33 AM