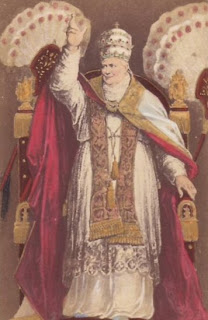 It is fairly rare in history to find a figure whose life provides beneficial lessons in their mistakes as well as their successes. Pope Pius IX is such a figure and one I came to know rather well writing a lengthy paper at university on the unification of Italy as it effected the Pope and the States of the Church. One thing I learned from that experience is how much more complex, colorful and extremely humorous man Pius IX was. He was the last pontiff to hold temporal power over the Eternal City of Rome and central Italy. He came to the throne of St Peter with the reputation of a liberal and left it with the reputation of a reactionary. While that is true, what I found in studying him was that those who considered him a liberal may have exaggerated that aspect of him; selectively looking at his words and deeds and seeing more of what they wanted to see than what was fact.

He was born Giovanni Maria Mastai-Ferretti in Semigallia on May 13, 1792 to an aristocratic family. After taking holy orders he came to be known for his great charity, concern for the poor and his Italian patriotism and “Italian” was a bad word to many at the time. When he was elected to the See of Peter in 1846 conservatives across Europe moaned. Taking the name Pius IX, the new Pope released from prison those held for revolutionary activities, he welcomed new technologies and innovations but liberal love for him collapsed when he refused to bless the war against Catholic Austria. Revolutionary mobs drove him out in 1848 and forced him to take refuge in Gaeta in the Kingdom of the Two-Sicilies while they set up the Roman Republic, which most of the people opposed.

Pope Pius IX was restored in July of 1849 thanks to the French after which the Pope made it clear that he was on the side of traditional authority and the established political and religious order. He condemned the anti-clerical practices of the nationalists and organized an international Catholic volunteer army to defend the States of the Church. Nonetheless, the nationalists continued to be victorious, partly because of Franco-Austrian antagonism. By 1860 the Papal States were annexed to the new Kingdom of Italy and only Rome remained under the control of Pius IX and then only because of the presence of French Imperial troops. When the Franco-Prussian War broke out in 1870 and these forces were recalled the Italian nationalist forces pounced. After putting up token resistance the Pope surrendered and withdrew behind the walls of the Vatican, declaring himself a political prisoner.

The Pope excommunicated all those involved in the downfall of the temporal power of the Church and issued the famous Syllabus of Errors in which he methodically laid out the revolutionary doctrines and trends to which the Church would never submit. He declared that the Pope would not conform himself to the march of so-called modernity and progress, effectively every passing popular trend, as the Pope was the guardian of those truths that were timeless, eternal and unchanging. The liberal world shrieked at the publication of the document, in many cases declaring that the end of the Catholic Church was at hand and that Pius IX, isolated and shut off inside the Vatican, would be ignored and forgotten; perhaps even be the last pontiff.

Pope Pius IX, however, was determined that such would not be the case and he had the support of many more than was at first recognized. The injustice of how the Pope was treated made many, even among non-Catholics, sympathetic toward his plight and for the first time in Church history the Pope himself became a focus of devotion with pictures of the Pontiff being displayed in humble homes alongside the Sacred Heart or the Blessed Virgin. Pius IX was also determined to show that while his temporal authority could be taken from him; his spiritual authority could not. In 1869 he summoned the First Vatican Council which likewise condemned the revolutionary trends in society and formally defined the doctrine of papal infallibility which states that the Pope, when speaking to the whole Church, from the Throne of Peter, on a matter of faith and morals as the Supreme Pontiff is protected from error.

It was a remarkably audacious thing to do at a time when the enemy was literally at the gates. Europe and much of the world howled at the actions of the Council but the Pope had made a very hard choice. He could have reconciled with the changes in society, adjusted the Church and how it operated to meet the new challenges but instead he drew a line in the sand and determined that the Church would instead present an alternative, a starkly different alternative with the modern world, between which the people would have to choose. Yet, through all of these times he never lost his compassion or his sense of humor (and he was a very funny man). When the man who had vanquished him, Victor Emmanuel II, the first King of Italy, was on his deathbed, Pius IX lifted his excommunication so he could be reconciled with the Church and receive the last rites.

Pope Pius IX died on February 7, 1878 after more than 31 years on the throne; the longest reign in papal history after St Peter himself. The Church was in a precarious situation; the papacy under house arrest, her territories occupied and in a standoff with the secular authorities. The people were forbidden to participate in Italian politics, forcing a choice between Church and State and even the nobility was divided between the White nobility around the King and the Black nobility around the Pope. Yet, the spiritual life of the Church continued to endure and even grow and while the temporal authority of the Pope had been destroyed his moral authority had never been stronger or more widely recognized.
Posted by MadMonarchist at 12:25 AM