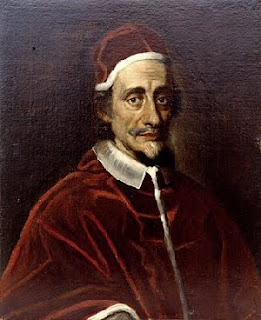 It was on May 19, 1611 that Benedetto Odescalchi was born to well-to-do business family from Como, Italy. Drawn to the Church, he took holy orders and soon rose to be a papal legate and was made a cardinal while still only a priest. On September 21, 1676 at the age of 65 he was elected to the Throne of St Peter and took the name and title of Pope Innocent XI. At a time when the Church was often at odds with the fabulous King Louis XIV of France, history’s most famous absolute monarch, it was, perhaps, fitting to have a Pontiff whose named called to mind the height of power achieved during the reign of Innocent III in the Middle Ages; a Pope known for bringing Christian monarchs to heel.

Whereas his predecessor, Pope Clement X, did not protest as Louis XIV extended his authority into more ecclesial matters, Pope Innocent XI immediately denounced the so-called “Gallican Articles” which most of the clergy in France had supported. The relations between France and Rome sunk to new lows and Louis XIV thought he might regain some papal favor (and serve his own interests) by revoking the Edict of Nantes in 1685 which granted religious freedom to French Protestants. However, Pope Innocent XI was less than pleased, saying, “Christ would not have done thus. Men must walk into the temple of God, they cannot be dragged”. Throughout the rest of his reign the Pope would be opposed by the most powerful Catholic monarch.

Trying to make the King of France bow to anyone might have been a futile effort but Pope Innocent XI was also determined to bring Christian monarchs together in opposition to threatening advances made by the Ottoman Empire in the Balkans. The Pope arranged a German-Polish alliance that brought the heroic King John III Sobieski of Poland riding to the rescue when the Muslim armies were about to overrun Vienna, Austria. A new imperial-holy league was organized by Innocent XI and he gave material, moral and financial support to a counter-offensive against the Turks which liberated Hungary and the city of Belgrade. In southeast Europe at least, Christianity was triumphant.

In the north there were more problems. Catholic hopes had soared when King Charles II of Britain converted on his deathbed and was succeeded by his openly Catholic brother King James II. The Pope advised the new King of England, Scotland and Ireland to move slowly and carefully, knowing that the English had developed a paranoid fear of Catholics, before trying to restore religious freedom to Catholics and dissenting Protestants. However, James II was tied by blood and money to the King of France and he paid no attention to the warnings of Innocent XI. He went ahead with his program of religious freedom, British Protestants were terrified and James was promptly overthrown by a Protestant coup in concert with a Dutch invasion. The chance for a Catholic revival in Britain had been lost and Pope Innocent XI, whose opposition to Louis XIV had put him on the generally Protestant side of that conflict, died only the next year in June of 1689.

The image of Pope Innocent XI depends a great deal on who is painting the picture. Many British and French Catholics still have a little lingering dislike of him. In fact, more than 50 years after his death French cardinals still blocked efforts to canonize the pontiff in 1744. It was not until 1956 that the Pope was declared Blessed Innocent XI and a declaration on his sainthood seems unlikely. However, despite the considerable opposition he aroused, it was mostly due to his staunch defense of the independence of the Church. He was not a lavish pontiff and left the treasury in surprisingly good shape, he was sincerely and devoutly religious and committed to cleaning up the Church and defending Christianity. All in all, a great man.
Posted by MadMonarchist at 12:27 AM