Birthday of the Queen of Australia 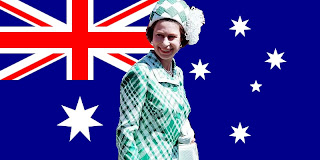 Today HM Queen Elizabeth II celebrates her official birthday in the Commonwealth of Australia. The republicans Down Under have been a particularly persistent bunch but the loyal monarchists have been steadfast in defending their sovereign and their constitutional monarchy. It is to their great credit that the trends have been toward more support for the Crown recently although nothing can be taken for granted as the 'treason crowd' have shown no signs of giving up but have vowed to continue asking the republic vs. monarchy question until they get the answer they are looking for and they are willingly aided by the political elites and the mainstream media. They have made no secret of the fact that they wish to change everything about Australia, from its constitution, its form of government and even the Australian flag. Some have even called for a change to the national anthem (silly me, I thought they already had). One would be caused to wonder if there is actually anything about their country these people *do* like. For the moment however, loyal Australians can take this occasion to celebrate their Queen, their constitutional monarchy, the deep ancestral roots they represent and the history of their proud and heroic service with the Empire and the Commonwealth that has made them famous throughout the world. Happy Birthday to Her Majesty and God Save the Queen of Australia!
Posted by MadMonarchist at 2:18 AM