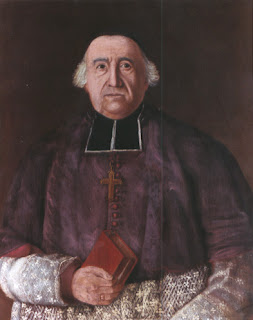 His Excellency Jean-Olivier Briand served as the Roman Catholic Bishop of Quebec from 1766 to 1784. Briand was born on January 23, 1715 and was ordained a priest in 1739. Two years later he accompanied Abbé René-Jean Allenou de Lavillangevin and the newly appointed bishop of Quebec, Henri-Marie Dubreil de Pontbriand to Canada. He served there, in the massive diocese of Quebec for the next nineteen years that Pontbriand was bishop. He was, in turn, consecrated as the seventh bishop of Quebec on March 16, 1766 in Paris, France.

Briand had the unenviable task of serving during both the French and Indian War and the American War for Independence, sadly the bishop was on the losing side on both occasions. As vicar-general during the French and Indian War he had to take over many of the responsibilities of the absent bishop and he ministered to the French soldiers on the battlefield but also realized that the odds were against them and that if Britain were victorious some accomodation would have to be reached for the peace and stability of Canada. When the Treaty of Paris was signed he had a Te Deum sung in thanks for the peace and he praised British General Murray for his fairness and humanity. It was partly thanks to his appeals to London that the rights of Catholics in Canada were respected by the British Crown.

When Britain recognized the rights of the French Canadians and allowed religious freedom it encouraged the Catholic leadership in Quebec and reassured them that making peace with the Crown had been correct. When rebellion broke out in the 13 colonies there was immediately talk of spreading the war to Canada and encouraging the French Canadians to take up arms again against the British. However, Bishop Briand saw this as extremely dangerous. The Protestant leaders in the 13 colonies (whose forefathers had left Britain because the Church of England was *too Catholic*) had a reputation for being very intolerant of Catholicism whereas the British had recognized their rights to maintain their religion and their civil laws. Embracing the revolution was the last thing Bishop Briand wanted.

Bishop Briand worked in cooperation with Sir Guy Carleton, Governor-General of Canada, to discourage rebellion and encourage loyalty amongst the French Canadian population. The good Bishop made it clear that rebellion against the Crown of Britain would be the same as rebellion against God. He warned all French Canadians to stay away from the troublemakers and further warned that any who took up arms against King George would be forbidden access to the sacraments, even last rites. He also addressed these issues to the tiny Catholic population in the 13 colonies south of Canada. Today many American Catholics celebrate the memory of the pro-revolutionary priest Father John Carroll of Baltimore. What many do not know is that when Father Carroll tried to encourage French Canadians to join the rebellion Bishop Briand formally excommunicated him.

Of course, Britain eventually lost the American war but the effort to take Canada was an utter failure and the French Canadians did not join the rebellion so Bishop Briand was at least successful in preventing that. Already looking ahead to retirement before the war Bishop Briand resigned in 1784 to hand over duties to a younger man but he retained his powers as bishop, at least on paper, for the final few years of his life. He died on June 25, 1794. Today he is remembered by Catholics as the "second founder" of the Church in Canada.
Posted by MadMonarchist at 12:30 AM