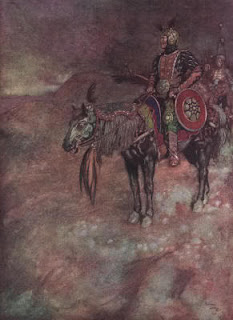 What does discussion of Central Asia bring to mind today? For most it probably conjures up images of war-torn Afghanistan, rugged mountains, bleak, rocky landscapes, crumbling cities and impoverished people. However, like every corner of the world Central Asia once had its golden age, its own era of power and prosperity and that time was the reign of one of the great conquering kings of history, known to the west as Tamerlane. Under his aggressive rule the Timurid Empire stretched from modern-day Turkey to India with visions of going even further.

Tamerlane was born on April 8, 1336 in the city of Kesh in what is now Uzbekistan. Throughout his life he was haunted by the memory of Genghis Khan and he was obsessed with claiming the mantle of the old Mongol Empire and surpassing the deeds of his hero. He could not claim descent from the Great Khan but tried to cement family ties by marrying granddaughters of the Mongol conqueror and so ensuring that his descendants would have the blood of Genghis Khan in their veins. Early on he was wounded in battle in the upper leg or hip which caused him to walk with a slight limp thereafter. This led foreigners to call him Timur the Lame or Tamerlane.

He rose to prominence as a general in the campaigns in Transoxania under Chagatai Khan, another descendant of Genghis. He never claimed the title of khan for himself, preferring instead the title Emir (Tamerlane was a staunch Muslim). Striking out from Transoxania he conquered the areas around the Volga River and Caspian Sea, much of it still populated by the descendents of earlier Mongol conquerors. He conquered Azerbaijan, parts of southern Russia and then turned southeast conquering virtually all of Persia by 1387 including the western areas of northern Iraq such as Baghdad and Karbala. He waged a harsh but successful war against the Golden Horde of southern Russia, effectively ruining their economy based on trade along the Silk Road.

When the Muslim ruler of Delhi, India was deemed to friendly toward his Hindu subjects Tamerlane used this as a pretext to invade in 1398. The campaign was waged with cunning and cruelty. To counter the formidable Indian war elephants Tamerlane panicked them by sending forward a charge of burning camels. He massacred roughly 100,000 Hindu captives in front of Delhi and after taking the city pillaged and destroyed it. He brought back immense quantities of spoils from India to his immense capital of Samarkand. He also took back all of the most skilled craftsmen and artisans he could find to embellish his own city. Setting up strong working governments in conquered areas was never a priority for him.

Unintentionally Tamerlane provided a great service to European Christendom. Just as the Ottoman Turks were on the verge of great victories against the Christians under Sultan Bayezid I Tamerlane struck from the east, devastating Iraq, Syria (taking Damascus from the Mamluks of Egypt), Armenia, Georgia and much of Anatolia. Even this displayed his obsession with Genghis Khan. According to Tamerlane his intention in the campaign was to restore the Seljuk Turks to power as it was their rule which had been first recognized by the Mongol Empire. The Ottomans declared him an enemy of Islam but in the end Sultan Bayezid was defeated, captured and died in captivity. This gave the west some much-needed breathing room though Tamerlane clashed with some Crusader knights in his path and detested the forces of the Italian city states who were hired to transport the Ottoman army.

Having smashed the best of the states of India, Persia and Turkey the Timurid Empire dominated Central Asia, earning Tamerlane a place of significance for that part of the world that has been compared to that of Alexander the Great for Greece. However, the shadow of Genghis Khan still haunted him and as respected and feared as he was by all around him, he still was not spoken of with quite the same reverence and awe as the legendary Mongol emperor. Therefore, he decided to do what Genghis Khan himself had never finished. Tamerlane determined to march east and conquer China.

By this time the Mongol Yuan Dynasty founded by Kublai Khan had been driven out of China and replaced by the Ming Dynasty under Emperor Hongwu. Tamerlane sent emissaries to the remnant of the Yuan in Mongolia and arranged an alliance. Together they would crush the Ming between them and restore China to the descendants of the Great Khan -even though he actually had neither background, ancestry nor religion in common with them. It was certainly an audacious plan but was not to be finally played out as the fearsome Tamerlane died on his way east on February 18, 1405 at the age of 68.

Tamerlane was buried in a magnificent tomb, protected by a curse. He said that if his resting place were ever violated a punishment even worse than himself would be visited on the trespassers. Eventually the place lost through time and shifting fortunes as the empire he founded did not long survive after him. However, the curse was remembered when a group of Soviet archaeologists found the tomb in 1941 and exhumed the body of Tamerlane. Two days later Adolf Hitler launched his massive invasion of the Soviet Union -certainly a worse fate if ever there was one.

Today, Tamerlane is remembered in different ways by different people. His impact on the world can certainly not be denied. The Golden Horde would never recover, much of the Middle East was devastated and one of his descendants would go on to found the Mughal Empire of India. For those within the heart of his empire he did well for but he was merciless to his enemies and conquered peoples were used to enrich the home front and no attempt was made to really win them over. Yet, for many countries in Central Asia the era of Tamerlane is a source of pride they can look back to as a period when they dominated the region and when Samarkand was a wonder of the world. Uzbekistan has claimed him as something of a national hero and placed a massive statue of the man where once stood a Soviet-imposed statue of Karl Marx.
Posted by MadMonarchist at 12:37 AM