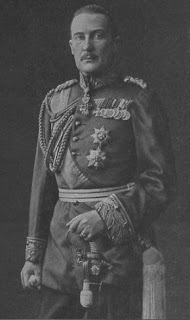 One of the top three royal commanders on the German side of the western front in World War I was Duke Albrecht of Wurttemberg. He was born Albrecht Maria Alexander Philipp Joseph von Wurttemberg in Vienna, Austria on December 23, 1865 to Duke Philipp of Wurttemberg and Archduchess Maria Theresa of Austria. He was set on a military career at a young age, enjoyed the esteem of his fellows and good family connections (he was awarded the Order of the Golden Fleece by the Emperor of Austria) and when World War I broke out he took command of the German 4th Army which he led to victory in the battle of the Ardennes in August of 1914. The Duke and his army saw action at the crucial first battle of the Marne before being transferred to Flanders in October as part of the “Race to the Sea” where the Germans were defeated by a combined French and Belgian force at the battle of the Yser. The Duke also commanded at the first and second battles of Ypres, the latter of which being where chemical warfare was used on a large scale for the first time.

Duke Albrecht gained a reputation as a solid and reliable battlefield commander and received a succession of honors in the following years. In August of 1915 he was awarded the order Pour le Merite (aka the ‘Blue Max’) and a year later was promoted to the rank of field marshal. In 1917 “Army Group Albrecht” was formed and placed under his command which held the southern end of the western front throughout the final stages of the war. The death of his father in 1917 had left him as heir presumptive to his cousin King Wilhelm II of Wurttemberg but the revolutions that swept Germany in 1918 also swept away the Kingdom of Wurttemberg.

With the extinction of the senior line of the royal family the head of the house passed to the ducal line in 1921 with the death of Wilhelm II. Duke Albrecht was thus head of the House of Wurttemberg and legitimate monarch of the country until his death at Altshausen Castle on October 29, 1939.
Posted by MadMonarchist at 12:47 AM