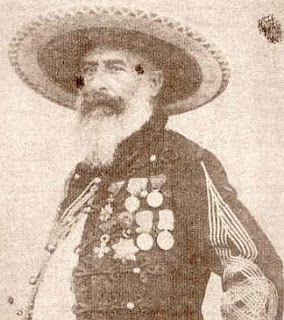 Perhaps the most colorful and controversial of those who fought on behalf of the Mexican Empire was the French cavalryman Charles Dupin. At the time of the campaign in Mexico he was already a decorated veteran of the war in China where he had earned something of an unsavory reputation. He was a zealous participant of the looting of the Summer Palace when French and British forces occupied Peking and he brought back a number of pilfered Chinese art treasures as spoils of war. When he openly advertised these items for sale in Paris he was dismissed from the army for conduct unbecoming of an officer. However, he had gained a reputation as a cunning and hard fighting commander.

When the war in Mexico, particularly along the northern frontier, degenerated into guerilla warfare it was Emperor Napoleon III himself who recalled the aging Dupin for service in Mexico. Emperor Maximilian though actually singled out Dupin for exclusion from his service since, although he had a reputation for courage and fearlessness, he was also known to employ methods ranging from extremely harsh to downright brutal. Nonetheless, Colonel Dupin came to Mexico and was given command of the contra-guerillas operating on the coast and along the Texas border. He cut an imposing figure in his braided uniform, wide sombrero and a cigar always clenched in his teeth. His mission was to fight fire with fire, to wipe out the bandits and Juaristas in the region and he had no qualms about returning harshness with harshness and cruelty with cruelty.

When the contra-guerillas seized a local village, their commander often issued a statement to intimidate the public such as this: "I am Colonel Dupin. Obey or you are dead! All resistance is futile...I protect the good but have no mercy for evil men. I kill men, I rape women, I murder children; I exterminate the enemy by fire, by steel and by blood; remember my words!" How much of these were serious threats or simply fearsome bombast is hard to say, but it all took place in an area where brutality was the order of the day on both sides. It must also be remembered that Dupin was based at Ciudad Victoria, operating in an area long held as the territory of the notorious bandit leader Juan Cortina. The men Dupin was up against also behaved in the most brutal fashion.

It was these guerillas and bandits that Colonel Dupin was charged with eradicating and terror was a primary tactic of his, realizing that without the support or at least the silence of the populace these guerilla units could not function. Therefore, Colonel Dupin launched a reign of terror across northern Mexico. His ferocity became legendary, as he probably wished it to, as stories spread of his troops hanging "invalids and cripples", executing civilians, destroying entire villages, burning crops, plundering homes, killing farm animals and burning public buildings. Those who were even suspected of being sympathetic to Juarez were killed on the spot.

Because of all of this, Colonel Dupin earned the nickname of "The Hyena of Tamaulipas" which at least one foreign visitor thought he seemed quite proud of. He and his men certainly inspired no great love or loyalty for Emperor Maximilian, but he did succeed in making himself feared all across the northern frontier. The name of Charles Dupin became like that of the bogey man and as a result of his operations his own men were often singled out for particularly brutal deaths when they happened to be taken prisoner. The contra-guerillas had good horses, good weapons and were well paid. Most of them were recruited from Matamoros, some even being Americans who had crossed into Mexico. They were a hard riding, hard fighting, totally ruthless elite within the Imperial Mexican Army. It also helped that they were so loathed by the Juaristas that any who were captured in battle by the republicans were executed on the spot.

In one of the bitter examples of the often less than cordial relations between the French and the Mexican Empire, Emperor Maximilian dismissed Colonel Dupin and sent him back to France. However, once there the old campaigner appealed to Napoleon III that with a thousand men and a free hand to use whatever tactics necessary he could wipe the northern border of Mexico clean of Juaristas. Napoleon believed him and to the outrage of Maximilian Colonel Dupin returned and took command of his own sector. The animosity was also certainly not one-sided. Colonel Dupin spoke openly of his dislike for Maximilian, dismissing him as a weakling who should stick to growing plants and flowers rather than being a monarch. However, one must keep in mind when hearing this that Colonel Dupin was the rough, ruthless, take-no-prisoners sort of man who would have called Rocky Marciano a sissy. Nonetheless, he did his job up to the end of the French presence in Mexico and while he may not have made friends of the populace he certainly succeeded in cowing them.

What finally became of the Hyena of Tamaulipas, I cannot say. Most of the information for this page came from only four sources and I have found details about Colonel Dupin impossible to come by in either French or English sources. If anyone has any further information that could be added here I would be only too happy to include it. I would assume that Colonel Dupin left with the evacuation of French troops since he was sent on orders from Napoleon and had to have known that he would have faced the most gruesome death if the Juaristas could have ever taken him alive. My guess is he returned to France and being a fairly old man, lived in retirement there until his death, though I cannot confirm that. What is certain is that he was the most shockingly brutal and the most feared man in the Imperial Army as well as being one of the most horrifyingly effective.
Posted by MadMonarchist at 12:28 AM