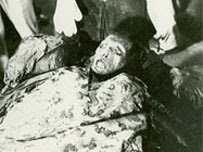 King Le Du Tong has been reburied in a formal ceremony by the Vietnamese communist government two days ago though with a minimal of fanfare (the story was buried in the society & culture section of most periodicals) after his remains (seen above) were unearthed 52 years ago by farmers in the province of Thanh Hoa in central Vietnam. Le Du Tong was the 22nd king of the Le dynasty and reigned from 1705 to 1728, a period of general prosperity for the country. Since 1964 the monarch's remains were kept at the Vietnam History Museum before the reburial on the 23rd with the ceremony presided over by Buddhist clerics and surviving descendants of the Le Dynasty.

From what I was able to see the reburial was rather less than I would have liked, looking like a combination of royal traditions and the burial of a communist party official. Still, some attention to detail was given with the traditional styles being used for the creation of the correct coffin but on the whole it seemed inferior to me to the last royal reburial in Vietnam, held in the 80's when the remains of the former Emperor Duy Tan of the Nguyen Dynasty were moved home from Africa and placed in the tomb of his grandfather Emperor Nguyen Duc Duc (who lacks an era name having reigned only nominally for 3 days). Much of the imperial-era monuments suffered from a severe lack of preservation under communist rule who despise their entire pre-communist history as a time of backward feudalism.

When Le Du Tong was discovered, the first time such a discovery was made, a number of royal artifacts were found with him, even some of his clothes surviving. The original coffin was damaged in the recovery, hence the need for a new one, and replicas of his royal attire was made for the reburial with the originals being kept in the national museum. The new royal robes were made by artisans brought in from Hue, the imperial city of the last Nguyen dynasty, who are experts at recreating regal fashions. More information can be found in an article from the Viet Nam News Agency.
Posted by MadMonarchist at 5:50 PM