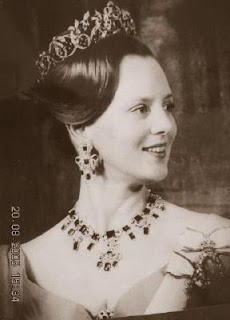 Today in 1972 Margrethe Alexandrine Porhildur Ingrid of the Royal House of Schleswig-Holstein-Sonderburg-Glucksburg became Her Majesty Queen Margrethe II of Denmark; sovereign of the oldest monarchy in Europe and the first female Danish sovereign to come to the throne after changes were made to the Act of Succession. Today she is easily one of the most popular monarchs in the world, beloved by her own people and widely respected abroad. As a lover of all very old things I've always had a soft spot for Denmark and I have a great deal of admiration for Queen Margrethe II in particular. In an age when reigning constitutional monarchs are expected to be seen and not heard she has not hesitated to speak her mind, even on controversial subjects. In a Europe dominated by the tyranny of the "politically correct" the Queen of Denmark is a fur-wearing, chain smoking monarch who has even dared to raise some warnings about the embrace of multi-culturalism in Europe. She is also a humanitarian, a gifted artist and an attentive wife and mother. She is an example to others and the Danish people are fortunate to have her. The Mad Monarchist wishes Her Majesty all the best on the anniversary of her accession and hopes that she will continue to reign for many more years to come.

Posted by MadMonarchist at 1:06 AM