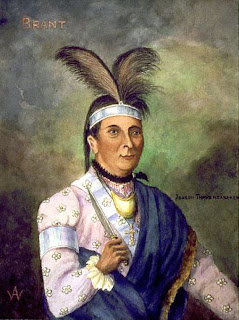 Joseph Brant was born in 1743, part of the Mohawk tribe of the Wolf clan, a member of the Iroquois Confederacy. Through his stepfather he became friends with William Johnson who was in charge of Indian Affairs for the British government in North America and later married Brant's half-sister. As a teenager he fought on the British side in the French and Indian War and was decorated for his service in Canada. In 1765 he married the daughter of a Virginia planter who had been a captive of a group of western Indians previously. After her death from consumption in 1771 he married her sister and became a member of the Church of England.

When the American War for Independence broke out Brant's mastery of numerous Indian language made him of great service to the British who were anxious to enlist Indian support against the colonial rebels. Brant hoped that by aiding the British the Iroquois would gain greater rights and autonomy. The British offered land in Canada in return for Indian assistance and when Brant visited London he was treated as quite the celebrity. He joined the Freemasons and was given his apron by King George III himself. After returning to America he participated in the campaign that retook New York with the army of General Howe. When the Iroquois waffled on which side to join Brant went out on his own, organizing his own volunteer force to fight with the British against the rebels.

In 1777 the Iroquois officially joined forces with the British. The same year Brant played a key role in the battle of Oriskany as part of the offensive south from Canada by General John Burgoyne. The following year rebel forces attacked and burned Brant's village while he was away and for which he led a raid of his own in retaliation; known by the Continentals as the Cherry Valley Massacre. In 1779 the British commander in Canada, General Frederick Haldimand commissioned Brant as a captain in the British army. Later that year Lord George Germain promoted him to colonel and Brant led a number of raids against the colonial forces, winning the battle of Minisink but the Crown forces were unable to stop the overall rebel campaign.

In late summer of 1779 the Continental Army launched a major operation against the Iroquois in New York, burning every village and killing every Indian they encountered. It was a brutal campaign but effectively ended the war with the Indians in New York. Brant, however, continued his raids in the Mohawk Valley working in conjunction with Butler's Rangers and the King's Royal Regiment of New York. He was wounded in the fight at Klock's field (a British defeat) but recovered sufficiently to go west to oppose George Rogers Clark's advance on Detroit. He was wounded again at Ft Detroit but fought on and continued to work for British-Indian cooperation even after the surrender of Crown forces at Yorktown, Virginia.

When the war ended, even moreso than most loyalists, the Indians were extremely upset with the loss of their land to the new United States. Brant was painted as the most horrid villain by the Americans, blaming him for the Wyoming Valley massacre at which he was not even present. Brant moved to Canada and worked with the British government to set aside land for half of the Six Nations in Ontario. Those who remained in New York later fell afoul of the United States and were forced off their land as well (Brant turned down an offer of a large pension from the U.S. President in return for persuading the other Mohawk who had moved to Canada to return). Brant continued to work for the interests of his people as best he could and remained staunchly loyal to King George until his death in 1807.
Posted by MadMonarchist at 12:23 AM