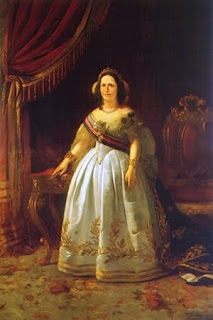 Empress Theresa Christina of Brazil was the consort of the last Brazilian Emperor Dom Pedro II. She was born in Naples on March 14, 1822, the youngest daughter of the future King Francesco I of the Two-Sicilies and his second wife Maria Isabella of Spain. She had a fairly traditional education for royal girls of her day studying the fine arts, music, singing, embroidery, French and instructions in the Catholic faith. Described as a sensitive and creative young lady she had a strong artistic bent.

After looking for a suitable bride in Austria, Spain and Russia the Emperor of Brazil turned his eyes toward the Two Sicilies. In 1842 a treaty was negotiated pledging the hand of Theresa Christina in marriage to HIM Emperor Pedro II of Brazil. They were married by proxy the following year with the Brazilian ambassador and Secretary of Foreign Affairs standing in for their monarch. A Brazilian naval squadron was sent to bring the new consort to her new country where she would live for the next 46 years.

The Emperor was reportedly repelled at the first sight of his new wife when he came on board with his ministers to greet her. He found her lacking in beauty, walking with a slight limp because of a birth defect and older than he expected. Theresa noticed this and after both managed a friendly greeting, withdrew into an adjoining room to cry. However, duty prevailed and the two would go on to have a mostly successful marriage. Pedro II was not always the ideal husband, but the new Empress Theresa was determined to be the ideal wife and she treated her husband with love and respect and quickly won over the populace who called her “the Mother of Brazilians”.

The marriage was blessed again by the Church and between the industrial and scientific interests of the Emperor and the artistic interests of the Empress the Brazilian Imperial court became quite a center of culture and learning. Aside from art, Empress Theresa was also interested in archaeology and she herself financed archaeological expeditions, the fruits of which can still be seen in Brazilian museums today. She also shared much the same taste in art and music with her husband.

In 1845 she gave birth to Prince Alfonso, their firstborn, but he died only two years later. In 1846 she gave birth to the Princess Isabel and in 1847 Princess Leopoldina came into the world. In 1848 Prince Pedro was born but he too lived for only a couple of years. She was very devoted to her daughters and to her husband and country, even helping to produce some pamphlets to encourage immigration to Brazil. She also took an active role in supporting the Church and religious orders in Brazil. Several cities in Brazil were named after her, a testament to her popularity and activity.

In 1889 she cried when news came that her husband had been deposed as Emperor of Brazil. Although plans were made to go to Paris the trauma of the coup and flight into exile was so stressful for the Empress Theresa that she died shortly after landing in Portugal on December 28, 1889.
Posted by MadMonarchist at 12:44 AM