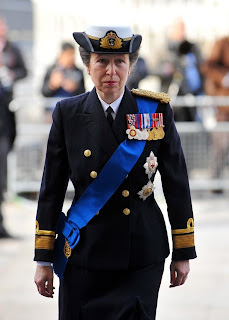 HRH Anne, the Princess Royal, is the only daughter of HM Queen Elizabeth II of Great Britain and HRH Prince Philip, Duke of Edinburgh. She was born Anne Elizabeth Alice Louise on August 15, 1950 and is currently tenth in the line of succession to the United Kingdom and 15 other Commonwealth realms. She is the seventh member of the British Royal Family to hold the title of Princess Royal and although she has escaped the intense media glare of other members of the family she has proven tireless in her duties to her country.

Princess Royal Anne was first educated in the palace by private tutors and was a member of the Girl Guides before going to boarding school. In 1973 she was married in a grand ceremony to Lieutenant Mark Phillips of the First Queen’s Dragoon Guards at Westminster Abbey. Only the next year Princess Anne was the target of a bizarre kidnapping plot. Her car was forced to stop, shots were fired and the gunman demanded the Princess Royal get out of the car. Showing no fear she snapped that such a thing was, “not bloody likely”. A passing pedestrian hit the gunman in the back of the head and helped Princess Anne get away while other police officers responded. Her security guard, who was shot by the criminal, was given the George Cross and five others were given the Queen’s Cross for Gallantry.

On her own time we see that the Princess Royal certainly inherited the Queen’s love of horses. Equestrian sports have been a lifelong passion of Princess Anne and this also gave her the distinction of being the only member of the British Royal Family to compete in the Olympics. In 1977 Princess Anne became a mother, giving birth to her son Peter, followed in 1981 by his sister Zara. However, domestic bliss was not to last and in 1989 Princess Anne and Mark Phillips separated after years of increased marital tension. The couple divorced in 1992 and at the end of the year the Princess Royal married Royal Navy commander (now Vice-Admiral) Timothy Laurence, a former equerry to the Queen. Because of her divorced status the couple were married by the Church of Scotland near Balmoral.

Over the years Princess Anne has made herself beloved through her charity work, focusing on areas often overlooked such as programs for the deaf, blind and those afflicted with autism. She also has an enthusiastic interest in the preservation of lighthouses and has visited and studied many of them all across Britain. She also carries out numerous official duties on behalf of the Queen, visiting Commonwealth realms, serving as colonel-in-chief of various regiments and was appointed to succeed her grandmother as Grand Master of the Royal Victorian Order. She also serves on the Olympic committee, works with a number of charities all over the world and is commandant-in-chief of the St John Ambulance Cadets. The Princess Royal undertakes more engagements than any other member of the Royal Family easily making her one of the busiest and most hard working royals in the world today.
Posted by MadMonarchist at 1:23 AM