Will America Be at "The End"? 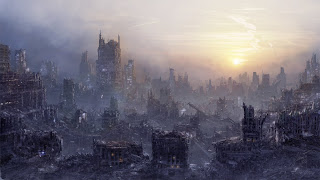 Being as I'm forced to go off from my 'regularly scheduled posts' I'm throwing a few more varied thoughts out there. Just tonight someone suggested that the United States might not be around at the time of the end of the world (and we're talking of the Christian tradition here) since the U.S. is not mentioned in Biblical prophecy. Now, this person did not think that the U.S. would have been destroyed by the time the end comes (though anything is possible) but rather this person (a Canadian oddly enough) theorized that current politics would build a backlash that would put someone of the Ron Paul stripe into office who would take the USA out of the United Nations and such globalist organizations and thus America would sort of 'sit out' the chaos involving the end of the world.

This was an interesting thought to me, which I had honestly never even thought of, for a couple of reasons. One is that, I had always thought America was in Biblical prophecy thanks to my original Bible teacher -my Dad (though we have pretty different views on the subject now). He has always held that the Biblical passage which refers to the "young lions" is speaking of the United States, and possibly nations like Canada and Australia, since these countries came from Britain and the British symbol (England and Scotland) is the lion. The other is that the U.S. is such a dominant power it would be hard for me to imagine America not being involved in some way. Of course this is dependent on just how close we are to the end as America will certainly not be such a big-shot forever as no power can be.

How close are we? I certainly cannot say -no one really can, but I do tend to think we are close. I think the only two real choices is that we are either very close or very, very far off because I definitely think we are building toward something that is going to happen very soon. People all over the world seem to just feel that, a subconscious cosmic alarm clock going off in the minds of people everywhere. We also have such signs as the birth of the State of Israel, unprecedented wild changes in weather, increasing internationalism and globalization and rising secularism and faith in government elites over traditional views of divinity. So, I think we are either getting close to the end (with no prediction on what "close" exactly means) which is what I tend to believe or we are approaching a middle point when everything falls apart and we start all over again with a civilizational collapse, another dark ages and so on.

Does anyone else have any thoughts on this proposal? Will the U.S. be involved and if so in what way? Any thoughts are welcome. Now, lest someone think I have strayed from the focus on monarchy for this blog, the subjects are related. One thing that many religions have in common is a prophecy concerning a great, benevolent monarch who will rise up just as the world seems to be coming apart. There is a very old tradition in certain parts of Buddhism of the hidden king who will emerge to set things right and put the world in order after a near total collapse. Catholic Christians also have the prophecy of the "Great Monarch" to look to (the Church takes no position on this of course) who will rise up and lead a grand restoration of Christendom before or generally around the time of the end of the world; one reason why any talk of "the end" makes me look more closely on the efforts to restore the French monarchy. Are we approaching that point? Why or why not?

I will leave it there for now, fully aware that I am breaking one of my own rules in doing this; asking a question of readers, as I've seen it done before and it can be a quick trip to nowhere if no one replies. Hopefully you won't be shy and will chime in with your thoughts on the subject.
Posted by MadMonarchist at 12:46 AM