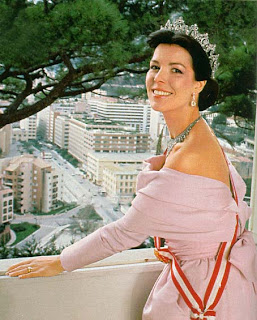 Today, HRH Princess Caroline of Hanover, Hereditary Princess of Monaco, celebrates her 53rd birthday. The eldest child of Their Late Serene Highnesses Prince Rainier III and Princess Grace of Monaco, the birth of Princess Caroline was a joyous event in the tiny principality. It was pouring rain on that day in 1957 when Caroline Louise Marguerite Grimaldi came into the world, welcomed by a 21-gun salute from the canon of Ft Antoine. Her proud father announced her birth to his subjects, closing with the words, "With us thank God and be joyful". And so they did. After the tragic death of Princess Grace, Princess Caroline had the daunting task of stepping up to become the first lady of Monaco, but she has carried on from that time never showing the strain of the burden she has had to bear. Today is also the wedding anniversary of Princess Caroline and HRH Prince Ernst August V of Hanover, but, as readers of the sister blog will already know, that is surely not much of a cause for celebration these days. Despite not starting in the most auspicious of ways, many hoped for the best in that marriage of Wettin and Grimaldi, once so hoped for by an earlier Princess Caroline of Monaco, consort to Florestan I, who had tried to arrange a match between her grandson, the future Prince Albert I, and Princess Mary Adelaide of Cambridge. However, Princess Caroline and Prince Ernst have lived apart since last year, the Monegasque being glad to have their daughter home but sorry for the circumstances, and with the Prince of Hanover now publically flaunting his paramour it seems the marriage is over for all intents and purposes though whether or not there will be a divorce remains to be seen. In any event, for the sake of their daughter, HRH Princess Alexandra, we can hope that some sort of amicable understanding is reached. If there is a divorce Caroline may lose her status as a "Royal Highness" and Princess of Hanover, but in the absence of any legitimate issue by her brother she will always remain Hereditary Princess of Monaco, for which she has always been best known and best loved in Monaco and around the world. The Mad Monarchist wishes Princess Caroline a very happy birthday and best hopes that she comes through her present difficulties as well as she has endured the many she has suffered in the past.
Posted by MadMonarchist at 12:24 AM