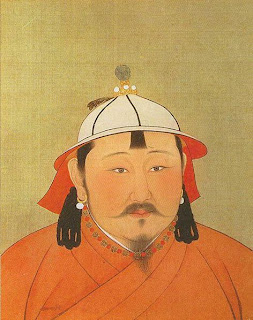 Temur Oljeitu Khan, Emperor Chengzong of the Great Yuan, was the grandson and successor of the storied Kublai Khan, founder of the Yuan Dynasty. Inheriting a well established empire from his grandfather he made no great conquests but further consolidated the dynasty, built up internal improvements and expanded Yuan influence over a number of independent states which accepted tributary status around the Yuan Emperor of China and Great Khan of the Mongols.

Temur was born in 1265 the son of Crown Prince Zhen Jin and although Kublai favored him to succeed him on the throne he was never named as heir. He accompanied his grandfather on military campaigns and was entrusted with the governorship of Karakorum in 1293. When Kublai died Temur won the throne by showing himself to be the better spoken master of the principles laid down by their most illustrious ancestor Genghis Khan. In 1294 he was formally proclaimed Great Khan of the Mongol Empire and Emperor of the Yuan dynasty. He did his best to carry on the policies of Kublai and to bring about an era of recovery after the expansion and exertions of the reign of his predecessor.

One of his first orders of business was to recover from the failed wars that marked the final years of Kublai’s rule against Japan and Vietnam. Although he called off plans for further campaigns against Japan the Japanese shogun resolutely refused to accept even nominal status as a Mongol vassal and launched a number of attacks on the coast. In Vietnam, however, after repelling three previous Mongol invasions the Viets were content with having independence in return for no further harassment and Emperor Tran Nhan Tong (third emperor of the Tran dynasty) recognized the Great Khan as his feudal overlord. Temur Khan released all the Vietnamese emissaries he had been holding and a peaceful tributary relationship was maintained for the rest of the Yuan reign between the Mongol Empire and Vietnam.

At home Temur Khan attracted the best and brightest to his court regardless of their background and had Mongols, Chinese, Persians, Christians, Buddhists, Taoists, Muslims and others among his officials. He respected and praised the Chinese Confucian system but did not follow it exclusively. The Tibetans continued to rise in prominence in his government and in a very surprising move Temur Khan banned the sale of alcohol in Mongolia since, then as now, alcoholism was proving problematic among his people. He did not increase taxes and even cut them back on certain occasions and for certain groups. We also have Temur Khan to thank for the portraits he ordered painted of all the Mongol emperors.

Over time Burma, Cambodia and Thailand all recognized the Mongol Emperor as their titular overlord. In 1297 this drew Temur Khan into an internal conflict in Burma when his vassal was attacked and dethroned. Persia became a tributary state for a time under the local Mongol-descended leader and there was an appeal for a sort of reunification of the successor states of the empire of Genghis Khan but nothing came of it and the Mongol Empire remained a loose federation of independent powers with only tenuous ties to the Great Khan.

The biggest problem of the reign of Temur Khan was economics. He did what he could to make things run more smoothly but it was a daunting task with the money necessary for recruiting talented officials (1/3 of them from outside of China and Mongolia), the expenditures of producing all official documents in formal and common Chinese, Mongolian, Uighur and Persian as well as moving the entire court between two capital cities was enormous and inflation weakened the paper currency in use. Nonetheless, aside from this area, it was a prosperous, powerful and peaceful empire that Temur Khan left behind at his death in 1307 at the age of 42.
Posted by MadMonarchist at 12:45 AM