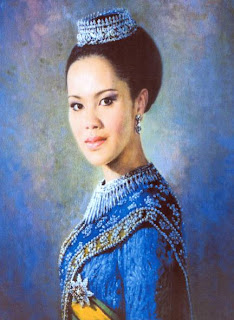 Her Majesty, Queen regent Sirikit of Thailand was born on August 12, 1932 to the second Prince Chanthaburi and his wife Mom Luang Bua Sanidvongse. While her parents worked at the Royal Siamese Embassy in Washington DC young Sirikit was cared for by her grandparents for the first year of her life. As a child she went to school amid many dangers due to the Second World War in which Bangkok was often attacked from the air. She went to the St Francis Xavier Convent school near the palace and after the war went with her family to Great Britain where her father was appointed ambassador to the Court of St James.

In Britain Sirikit learned English, French and the piano, she was able to visit a number of countries and studied music in Paris where she also met her musically inclined husband-to-be who was then studying in Switzerland. A courtship soon developed between the pair. In 1948 the future king was in a car accident that injured his back and cost him an eye but Sirikit was ever at his side to care for him. She moved to a school closer to the Prince to be near him and after a one year engagement the couple were married in 1950.

One week later man and wife became King Bhumibol Adulyadej and Queen Sirikit of Thailand but returned to Switzerland after the coronation to continue their education, returning to Thailand in 1952. The handsome young couple were extremely popular with the people and the King greatly loved and trusted his wife. In 1956 when the King, following Thai custom, spent some time as a Buddhist monk he named Sirikit regent of Thailand in his absence, only the second time in Thai history that a consort had been given the title of regent.

Over the years Queen Sirikit has endeared herself ever more to her people who celebrate her birthday as a national holiday and as Thai mother’s day. On the family front she gave her husband three daughters and one son born in 1951, 1952, 1955 and 1957. One of the areas that the Queen has taken a particular interest in is the Muslim minority in southern Thailand which she frequently visits and works to promote peace and cooperation. Her service in this area, as a “quiet diplomat” as she has been called, has been extremely helpful in maintaining peace in the kingdom.

Queen Sirikit has also shown herself to be a talented writer, writing a book about her travels in Europe as well as a number of musical compositions. As President of the Thai Red Cross she was of great service during the tsunami disaster and has also taken a special interest in the humanitarian service of Cambodian and Burmese refugees who have fled to Thailand. She has also worked to emphasize and preserve traditional Thai culture and history and keep it alive in new ways for younger generations. A particularly proud achievement she participated in was the production of the massive, epic movie “The Legend of Suriyothai” about the inspiring life of the most famous warrior queen in Thai history.

In recent years Queen Sirikit has suffered from several health problems but these have been kept strictly private. Nonetheless, she has been a tower of strength for her husband in his increasingly frail years. She is extremely protective of him and due to his fragile health has had to take on most responsibilities in the palace while always working behind the scenes in deference to her revered husband and king. Her years of service and her loving kindness toward her husband have been outstanding and prove her totally worthy of the immense regard in which she is held by the Thai people.
Posted by MadMonarchist at 12:29 AM