Was the Baron so Bad? 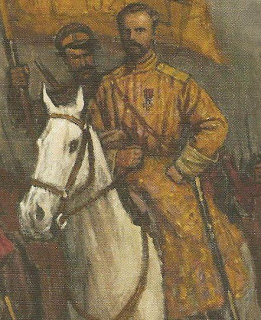 It was on this day in 1886 that the Baron Roman von Ungern-Sternberg was born in Austria (though he was of the Baltic nobility and grew up on the ancestral estate in Estonia). Given the reputation of this man, often referred to as the “Mad Baron” or the “Bloody Baron” I thought this anniversary of his birth might be a good time to display some of the often overlooked positive aspects of this man so widely dismissed as being such a quintessential villain (an image intentionally hyped by the Bolsheviks for whom he was the ultimate bogey man).

First of all, it should be kept in mind that very little is known concretely about the details of the Baron’s life. Most of what little we have to go on is from second or third-hand accounts and rumors, often spread by his enemies. However, much of the more lurid stories of cruelty that have been attributed to the Baron were actually the work of the military governor of Urga; Colonel Sepailov. This was a man even the Baron found distasteful but who he never acted against for what could be called religious reasons. Sepailov, who likely suffered from Tourette’s syndrome, had been victimized horribly (as did many others) by the Bolsheviks who tortured him and massacred his family after he escaped them and that should be kept in mind as well.

The Russian Civil War was a brutal affair, no doubt about it, and in the distant wilds of northeast Asia things were no different at best and sometimes worse. However, the Baron does not often get recognized for the good things he did while occupying Mongolia. After taking Urga he administered harsh punishments to any troops who pillaged, any found drunk or hung-over on duty and took numerous measures to protect the population. He set up a wireless station, a telephone system and disinfected the city thoroughly. He set his troops to work cleaning up the city and established a sewage system to prevent people from going in groups in the streets as was customary.

The Baron also set up a public transportation system within Urga, built bridges, printed a newspaper, established veterinary clinics and hospitals, re-opened schools and reestablished commerce, harshly punishing anyone who harassed or looted the merchants who were mostly Chinese. Accusations that the Baron was a virulent anti-Semite are also contradicted by accounts that he had Jewish officers, whom he called his friends, one being among his most senior commanders and that all his agents abroad were Jewish. Efforts have also been made to portray him as some sort of precursor of Adolf Hitler; which is possibly the most absurd accusation of all as there was no one less of a racist than the Baron whose troops included Russians, Mongols, Tibetans, Chinese, Japanese and others. He also never fought for his own power but for the restoration of the legitimate authorities that had been removed.

Was the Baron a warm, fuzzy, politically correct guy? Certainly not, but the worst tales told of him can, in most cases, be attributed to Soviet propaganda, false reports given by others to ingratiate themselves to the winning side and divert from their own crimes and simple fantastic story telling by people often extremely hostile to the causes of monarchy, religion and/or traditional authority for which the Baron fought. Of course, taken altogether, the popular image of the Baron is still useful for those of us who find fun in shocking, outraging and annoying republicans.
Posted by MadMonarchist at 12:34 AM