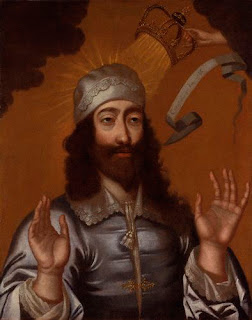 It was on this day in 1649 that HM King Charles I of Great Britain suffered martyrdom for the cause of religion and monarchy at the hands of that archtraitor of the English-speaking world Oliver Cromwell. The regicide of Charles I had far-reaching consequences not often considered. Of course it brought about the era of the Cromwellian Puritan dictatorship which remains to this day the most oppressive government in English history but it also meant great suffering for Scotland and a near genocidal campaign in Ireland. However, it also represented the start of an era of republican triumphalism that was to last for much, much longer. In fact, with some periods of exception it has continued to this day. It was the victory of the Parliamentary forces, illustrated by the regicide of Charles I, that gave them the strength of will to continue to resist all efforts at a true royal restoration ever after.

Of course we know that the people of Britain soon had enough of Cromwell and his oppression and happily welcomed the martyred King's son back on the throne as Charles II, but the fact that these traitors had never been openly and finally defeated on the battlefield meant that they still felt empowered to resist monarchs thereafter. This is seen in the efforts to subvert the natural succession under Charles II who finally was obliged to dissolve Parliament and forbid any talk of him divorcing his wife or disinheriting the Duke of York. It was seen the coup against King James II when he failed to please the Parliamentary elites and in the restrictions placed on his successors starting with King William III and Queen Mary II. It also set a dangerous precedent in the minds of the English-speaking-peoples that the monarchy was something which could be toppled. Something of that monarchial sacredness had already been lost with the judicial execution of Mary Queen of Scots but with Charles I it was even more emphasized as he was no foreign prince and the execution was done, not by a rival monarch, but by a rump of Parliament. It seared into the minds of traitors for generations that it was Parliament rather than the Crown that was the ultimate power in the land.

At his trial the heroic King Charles I did not really deny that. He was within the power of Parliament and he knew it. He also knew that while Parliament, by virtue of Cromwell's New Model Army, had the power they did not have legitimate authority which rested with him alone. At his trial he compared it to the power of a roadside bandit, who can take your money or your life, but whose power is based on material force and not true, spiritual authority. The words of King Charles I at his trial are something every monarchist should read, especially those who consider the reign of Charles I as some kind of totalitarian tyranny. Charles I fought, not simply for his own Crown, but for his right, and by extension the right of every person in his kingdoms, to that which was lawfully his own. As the King said, if they can treat the sovereign of Britain so, what man, high born or common, could ever be sure of that which is his own? Charles I was fighting for the traditional, natural government of Britain and fighting against what we would now call the "big government" of political elites.

It is, in fact, even something of a lie to say that the Parliamentary forces actually represented parliamentary government in any way. The Parliament had been stripped, purged and violated in every way in order to produce the results that the Cromwellian elite wanted. Even then, Cromwell was fairly quick to dissolve Parliament when it failed to please him after the great King had gone on to his eternal reward. The Parliamentary system also died alongside Charles I and was only ever restored because the treasonous clique recognized that it could be manipulated to serve their own purposes. All of this makes the memory of King Charles I a very useful one for monarchists today and we should all speak up on his behalf when he is slandered. King Charles is a symbol of true royal authority and legitimate government fighting against powerful political elites. He is also a symbol of religious unity for he was declared a saint and martyr of the Church of England but was married to a Catholic and supported by the vast majority of Catholics in his own time. This is contrasted with the religious intolerance of the Puritans and especially the horrific massacre of Irish Catholics by Cromwell and his troops. He is also a symbol, sadly not the only one, of how republican governments almost invariably come to power only through blood, brute force and the murder of the innocent.

May King Charles rest forever with the angels.
A Litany of Charles, King and Martyr (CofE)

Posted by MadMonarchist at 12:09 PM