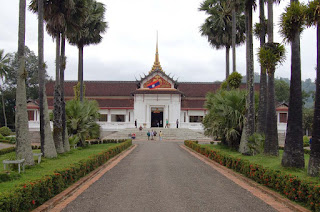 Since I am currently off my regularly scheduled posts, I thought I would take this opportunity to do something I have been meaning to for a while; that is to send a Mad Monarchist SALUTE to the loyal monarchists of Laos. The country is in a terrible condition today, effectively still under Communist Vietnamese occupation, and I had heard that loyalty to the monarchial principle survived there with some people venerating images of the neighboring King of Thailand in the absence of their own monarch. However, I have lately become very impressed by the loyalty of the Lao exile community, particularly the younger generations. Since establishing the Mad Monarchist Channel on YouTube I have been surprised that of all the videos I have contributed (all of them very modest with nothing at all fancy as you all know) that it is a short video on the Royals of Laos that has been viewed more often than any other, some 21,287 times as of this posting. That so many young Lao people, having been born and lived entirely in exile, still have such an interest in their royal history, such fidelity to their ancient monarchy and steadfastly staunch opposition to the communist usurpers who took power frankly inspires me. For displaying all of these qualities in the face of such obstacles I think the loyal monarchists of Laos should serve as an example to others in similar situations around the world. So, ever-loyal, ever-faithful patriotic loyalists of Laos; the Mad Monarchist salutes you!

(so everyone will know this is true loyalty at work and not some fabulous bit of video wizardry on my own part, I submit the video in question)

Posted by MadMonarchist at 1:32 AM