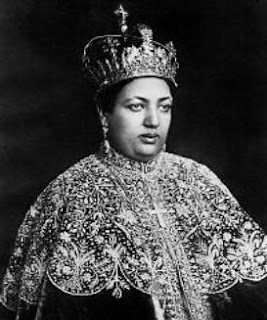 Empress Menen Asfaw, the last Empress consort of Ethiopia was born on March 25, 1889 and was herself of distant imperial lineage. She likely met her future husband at the home of her uncle Lij Iyasu and they immediately made a connection. Her family had earlier arranged for her marriage to another, but seeing the opportunity to establish closer ties with the man who would soon be the next Emperor Lij Iyasu made the arrangements for Menen Asfaw to marry Haile Selassie. The two were wed in early August of 1911. She was 20-years-old and the future Emperor was very impressed by her character and friendly disposition.

In time Empress Menen Asfaw would give Emperor Haile Selassie six children; Princess Tenagnework, Prince Asfaw Wossen, Princess Tsehai, Princess Zenebework, Prince Makonnen and Prince Sahle Selassie. When Haile Selassie became Emperor of Ethiopia his wife was crowned Empress alongside him. As consort, Empress Menen was very active and undertook a number of charitable duties focused on women, children and religious issues. She served as patroness of the Ethiopian Red Cross and the Ethiopian Women’s Charitable Organization. She also served as patroness of the Jerusalem Society which organized pilgrimages for Ethiopians to the Holy Land.

One of the primary areas of importance for Empress Menen was education and she worked tirelessly on that front. She founded the Empress Menen school for Girls in Addis Ababa which was the first all girls school in the country and accepted day students and boarding students. Young girls from all across Ethiopia came to the school for their education which was closely supported by the Empress who took an active interest in all that went on, frequently visiting the school, looking in on classes and presiding at awards and graduation ceremonies. The Empress also supported numerous charitable causes for the poor, the infirm and the handicapped.

Religion played a central role in the life of Empress Menen, a devout member of the Ethiopian Orthodox Tewahedo Church. She gave very generously of her time and personal wealth to build, restore and renovate numerous churches in both Ethiopia and the Holy Land. Among her many projects was the Holy Trinity Monastery on the Jordan River and the support she gave to the building of the Cathedral of St Mary of Zion in Axum though, unfortunately, she did not live to see that particular house of worship completed. During World War II she was exiled from Ethiopia due to the Italian occupation and she occupied her time going on pilgrimage to the Holy Land to pray for the deliverance of her country and pledging her crown to the Blessed Virgin Mary at the Church of the Nativity in Bethlehem if Ethiopia would be liberated. When Ethiopia was finally liberated from the Allies Empress Menen was as good as her word, having a replica crown made for future imperial use and sending the original crown to the Church as she promised.

HIM Empress Menen Asfaw died on February 15, 1962 and was buried in the imperial crypt at the Holy Trinity Cathedral. She had been an exemplary consort throughout her life with the last Ethiopian Emperor. She was supportive, standing back in public but a trusted advisor in private; she was generous, compassionate toward he people and dutiful in the spiritual aspects of her life and her vocation. It was, perhaps, merciful that she did not live to see her country and her beloved husband ruined by the communist revolution that was only a few years away.
Posted by MadMonarchist at 1:13 AM