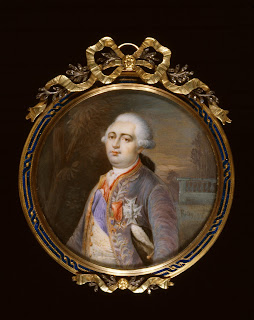 It was on this day in 1793 that His Most Christian Majesty King Louis XVI of France and Navarre was executed by guillotine by a mob of revolutionary traitors. The horror and far-reaching effects of this monstrous crime cannot be overstated. King Louis XVI, almost every serious historian now admits, was no tyrant and no villain. He was a good, upright, compassionate, God-fearing man devoted to his wife, his children and his beloved France. He was also a hard working monarch doing everything he could to set France again on firm financial ground and repair the slow decay the kingdom had been experiencing for some time.

The vision that Louis XVI had for France was a great one. He saw France restoring herself as the dominant power in Europe, recovering at least somewhat the influence lost to Great Britain in North America, pushing the British out of India to be the primary European power in the subcontinent and establishing new ties with the Far East in Indochina. His vision was also for a more religious France, a vision shared by his dear wife Queen Marie Antoinette –though few today would know it. They were a devoutly religious couple and if anything pained him more than the pressure to give up the powers of the monarchy that were his birthright it was being forced to accept legislation that attacked the Church in France.

In King Louis XVI the French people had a monarch who was at the same time benevolent, pious and committed to their national greatness. Why then was this man, who had harmed no one and done nothing but that which he thought would better his kingdom, so cruelly deposed, humiliated and put to death? Some still maintain that this was an unfortunate but necessary step to forever put away the era of the Kingdom of France and usher in the era of the revolutionary French republic. If that is so, one must truly ask what that says about a political system which can only come to fruition through the vicious shedding of innocent blood; the taking of an innocent man’s life. What is the fruit that will be brought forth by a tree that required chopping off the head of a monarch, husband and father to grow?

The fruit, as the world soon saw, was terror and death on a scale never before imagined in Europe. The revolutionary rats were driven into a frenzy by their execution of the king, drunk on their own power, and they let loose a wave of chaos, mass murder, persecution and vile criminality of all sorts that defies description. Multitudes went to their deaths and all of Europe was eventually plunged into long succession of wars in a bloodletting and political upheaval unmatched until World War I.
However, the loss was deeper than that. There were restorations, times when things got better and worse over and over again in the future, but to a large extent it was not just Louis XVI who died on this day in 1793; it was France. When Louis XVI, or Citizen Louis Capet as the traitors mockingly called him, went up to the guillotine the Kingdom of France went with him. The France of St Joan of Arc with her blessed banners, the France of St Louis whose benevolent leadership set a standard for the world, the France of King Clovis, Charlemagne and Charles Martel, the France that was the 'Eldest Daughter of the Church'. The loss of Louis XVI, and all that he stood for, the idea of France that he represented, was a loss not only to his own family and his own country but a loss for Europe, the west and a loss for the world.
His Holiness Pope Pius VI spoke of Louis XVI as a martyr and Louis' daughter campaigned for the Church to recognize him as a saint. This issue was finally dropped as the Church could not determine to what extent he was killed for his faith or for political reasons. However, there is no doubt that Louis XVI was a martyr of a kind; he was a martyr for the Ancien Regime, a martyr for Christendom and a martyr for sacred monarchy. May His Most Christian Majesty rest in peace, may the crime of his regicide never be forgotten and may his house be one day restored to France and the wrongs of the past set right again.
Posted by MadMonarchist at 1:16 AM