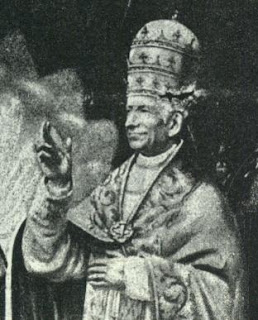 Considered by many to be the last of the 'princely pontiffs', Pope Leo XIII is still remembered as a great pope, despite the fact that he is the victim of many misconceptions. Most often, this centers around one of the all too frequent, and always absurd, efforts to brand particular popes as being 'liberal' or 'conservative'. In fact, every pontiff is both and every pontiff is neither. What Pope Leo XIII was, was a man of great compassion, who urged the Church to defend those who were oppressed and persecuted, a man who defended endlessly the rights of the Church, who upheld the exalted nature of his position, not on the basis of any self-importance but in keeping with the principle that his position was the position of St Peter, and who faced the immoral world head-on with a message of life and dignity as well as a refusal to compromise on matters of principle.

Leo XIII was born Gioacchino Vincenzo Pecci in Carpentino on March 2, 1810. Prior to his election to the Holy See he served as Papal nuncio to Belgium and was the camerlengo following the death of Blessed Pope Pius IX. No time in the history of the world can hardly ever be seen as unimportant, and indeed, the years of Leo's reign seemed to have been a particularly crucial period in the history of the Church. Rome was an occupied city, the old Papal States had been conquered, the Pope was a prisoner in the Vatican and many nations were adopting anti-Catholic attitudes, particularly so in the new united Germany where the Chancellor Otto von Bismarck launched the kulturkampf against the Church.

The international situation was, perhaps, the Pope's biggest problem. He tried tirelessly to reach agreements with Belgium, Germany and Russia, but European politics were particularly unstable during this period of nationalist competition and making lasting accommodations proved extremely difficult. However, if there was one role which Pope Leo XIII excelled at, it was in the role of a teacher for the Church and Christianity. He showed the faithful how to oppose the evils of the modern world without turning their back on society and progress. He urged the Catholics monarchists of France to stop holding aloof and work with the republic. However, as he was himself a devoted monarchist, he advised this in order that a royalist majority could be properly elected and the kingdom restored.

Misunderstanding of this, as well as his most famous encyclical, Rerum Novarum, which accepted the use of trade unions and the need for workers' rights advocates, caused some to label Leo XIII as a "liberal" pope. In fact, he was simply a man of fairness and compassion who did just as much good that could be called "conservative" as "liberal". He was deeply concerned by the exploitation carried out during the height of industrialization and his beliefs on human dignity demanded that he stand up for the workers who were being taken advantage of. He also urged all countries to finally end the shameful use of African slavery and condemned such dangerous organizations as the Freemasons, socialists and the rising Communist Party. In 1899 he solemnly dedicated the whole of humanity to the Sacred Heart of Jesus and taught that there should be no conflict between Christianity and science. Even on the subject of trade unions it is often forgotten that Leo XIII was adamant that Catholics join only specifically Catholic trade unions and that they should stay away from secular or inter-religious ones.

Pope Leo XIII also called for a return to Christian unity and offered friendship to the East Orthodox and Protestant communities, he being the first to call Protestants, "our separated brethren". However, everyone recognized that there was only so far this outstretched hand would reach as he was just as adamant in his defense of the rights and authority of the Catholic Church. He would tolerate no dissent once he had adopted a policy, often with the friendly reminder that, "ergo sum Petrus". He conducted the Papal court with all of the custom and ceremony that the Throne of Peter deserved. People knelt when presented and kissed his foot, and no one was to sit down in his presence uninvited. The strictest standards of respect were to be maintained at all times. None of this was anything new, but after Leo XIII most of this protocol would be reduced to a minimum or eliminated entirely.

Leo XIII, who wrote more than any other pope, lived to the age of 93 having a reign of 25 years, 4 months and 29 days. Although increasingly frail, his mental abilities never wavered in the least. Until the last he was an example of a firm but compassionate, wise yet realistic and spiritual man. As pontiff he established a working normalcy for the Vatican to function during the continued stand-off with the Italian government and he never wavered in maintaining the position held by his predecessor Pius IX. He encouraged the use of sacramentals such as the rosary and scapulars and established good relations with Tsars Alexander II and Alexander III in Russia. When the Armenian Church joined with the Catholic Church Pope Leo XIII surprised some by refusing any suggestion that they adopt Latin customs in place of their Byzantine traditions. Today, his endorsement of trade unions is often all that is remembered (and then not correctly) but Leo was no liberal revolutionary. In fact he disturbed many such individuals in remarking that it was, “quite unlawful to demand, defend or to grant unconditional freedom of thought or speech, of writing or worship as if these were so many rights given by nature to man”. Pope Leo XIII, a giant figure simply by the length of his reign alone, died on July 20, 1903 and was buried in the Basilica of St John Lateran.
Posted by MadMonarchist at 12:44 AM