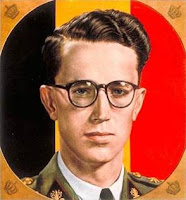 I had almost forgotten to post the final part of Defending the Saxe-Coburgs at The Cross of Laeken (thanks to BR for the reminder). This last part deals with a monarch who I regard as one of the greatest of my lifetime, King Baudouin, refuting some of the attacks made against even that saintly man. So, if you have not; I urge you to check out all four posts on Defending the Saxe-Coburgs Part One, Part Two, Part Three and Part Four. The Belgians seem to be a much put upon people and their monarchy is in possibly the most difficult position of any in Europe. Yet, this is what monarchists must do, when faced with republican attacks, defend our monarchies (even if just the principle) and answer falsehoods with facts.
Posted by MadMonarchist at 5:55 AM