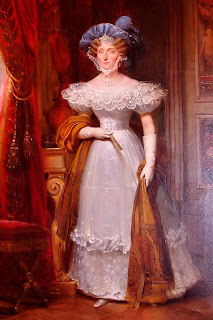 Queen Maria Amalia of Naples and Sicily, consort of King Louis Philippe of the French, is an interesting historical figure and, in many ways, not the sort of person one might expect her to be. She was born Princess Maria Amalia of Bourbon-Two Sicilies at Caserta Palace on April 26, 1782 in the Kingdom of Naples/Two Sicilies. Her parents were King Ferdinand IV and Queen Maria Carolina. From her earliest education she was noted for her religious piety and sincere Catholic faith. With a mother like Queen Maria Carolina and a grandmother like the Empress Maria Theresa, she was fully expected to follow in their footsteps as a strong, involved Catholic consort. While still very young her mother and her aunt, Queen Marie Antoinette of France, planned for her to one day marry her cousin the Dauphin. Obviously, the French Revolution and the tragic death of the poor Dauphin ended that childhood dream. However, it was important inasmuch as Maria Amalia had it in her mind from a very early age that it was her destiny to be the Queen of France.

As a child she watched the horrific forces of the revolution sweep Europe, first France where her aunt and uncle were murdered, and then Italy itself which forced her to flee with her parents to Sicily on more than one occasion. She watched as her mother rose to the occasion to do whatever was necessary to save her family and maintain their kingdom. It was a very difficult time for the Neapolitan Royal Family and left quite an impression on the young princess. It was while in exile as revolutionary turmoil swept across the Italian peninsula that she first met Prince Louis Philippe of Orleans. Few would have expected an instant romance. Prince Louis Philippe came from quite a liberal background, his own father, the Duke of Orleans, having been a supporter of the French Revolution, whereas Princess Maria Amalia was a conservative Catholic of the Bourbon and Hapsburg dynasties that had most opposed the entire revolutionary movement. Nonetheless, three years later they were married in 1809 and Princess Maria Amalia became the Duchess of Orleans.

Despite their lofty titles, however, the new couple were not living in grand style. With the revolutionaries and later Napoleon ruling France the pair were constantly in exile and essentially living off of the charity of the British government. However, throughout these difficult times Maria Amalia never lost her regal bearing, her principles or the values with which she was raised. Given the, shall we say “undignified”, way in which her father often behaved, it is to her credit that she viewed being royal as a service, a duty (both to God and the people) and that as a royal she had to set an example to those around her and she always conducted herself with dignity regardless of her circumstances at the time. Ultimately, thankfully, those circumstances changed and she led the restoration and revival of the Orleans ancestral home at the Palais-Royal and she accomplished it without breaking the bank. Indeed, throughout her life, Maria Amalia was known for her generosity and Christian compassion. Even as a staunch royalist who opposed revolution and all it stood for, she never held anger against the common people whose actions may have been entirely wicked but who were often motivated by privation and concern for their families.

It was the human, moral side of things that concerned her the most, far above and beyond power politics and diplomatic chess play. This was certainly her biggest issue when she suddenly became “Queen of the French” following the July Revolution of 1830 which turned out His Most Christian Majesty King Charles X and placed her husband on the throne. This was the “July Monarchy” of France, a strange hybrid of the traditional Bourbon kingdom and the revolutionary republic. Her husband was made king but of what was known as a “popular monarchy” (very trendy at the time but a fashion that faded rather quickly) in which he was “King of the French” rather than the “King of France”. Traditional monarchists were outraged at a Kingdom of France under the revolutionary tricolor, led by a king from the House of Orleans which had been tainted by complicity in the revolution and they were certainly unimpressed when King Louis Philippe I adopted the title of “Citizen-King” to show how royalist and republican sympathies were trying to be united.

The now Queen Maria Amalia was greatly disturbed by all of this, certainly not overjoyed at her new status. As a conservative, Catholic royalist she did not approve of how King Charles X had been overthrown nor of the style of the new regime. However, she was also a devoted wife who felt bound to support her husband. Thrust into this position that she did not seek, she determined to make the best of it and to shun politics as completely as she could. She had real sympathy, even anguish, at how the previous Royal Family had been treated but, dutiful as ever, she carried on. Many monarchists since have criticized both the Queen and her husband for this, but few have ever even attempted to answer the question of what they, and certainly at least the Queen, could have done instead? Had they refused to participate at all France would certainly have simply restored the republic and become completely devoted to the revolutionary ideal once again. While there is certainly at least room for criticism of King Louis Philippe on this occasion, none can attach itself to Queen Maria Amalia who was simply responding to circumstances beyond her control. She also had an inherently stabilizing presence on France since many monarchists who were opposed to the “Citizen King” and the new popular monarchy were at least comforted by the fact that there was a traditional, Catholic Bourbon Queen of France in the best tradition of those who had gone before her.

In some ways, this goal of unity, was the one primary aim of her time as Queen. While her husband tried to bring the republicans around to accepting having any sort of monarchy at all the Queen tried to bring conservatives and the royal courts of Europe around to the idea of accepting the popular monarchy as being the only means of making the best of a bad situation. She was dutiful as ever, to her husband and her adopted homeland. Ultimately, of course, this new monarchy could not be all things to all people and in the Revolution of 1848 the last King in France was overthrown and Queen Maria Amalia had to flee with her family again, this time to Great Britain. She spent the rest of her life attending to her children (and she had always been a very good mother) and spending her time in pious reflection, prayer and daily mass. She died on March 24, 1866 and was buried in the same dress she had worn when she had her husband had been forced to leave France. She was, after all, going “home” to the ultimate restoration and made a statement even after leaving this life.
Posted by MadMonarchist at 12:18 AM