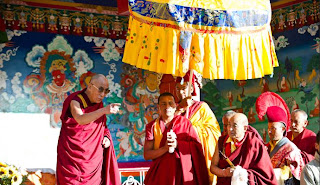 The Tibetan government-in-exile today announced that HH the XIV Dalai Lama of Tibet has submitted his abdication or resignation from his political role as the monarch of Tibet, head of the government based in Dharamsala, India. Speaker of the Parliament Penpa Tsering read out the letter from the fourteenth incarnation of Kundun asking the government to relieve him of his position in politics.
"I want to acknowledge here that many of my fellow Tibetans, inside and outside Tibet, have earnestly requested me to continue to give political leadership at this critical time," the letter stated.

"My intention to devolve political authority derives neither from a wish to shirk responsibility nor because I am disheartened."
The Dalai Lama reiterated his long-term goals for the Tibetan people and encouraged them to continue to press for "meaningful autonomy" from the People's Republic of China. Communist China had ruled Tibet for 52 years, most of the lifetime of the 75-year old Dalai Lama.
"It is extremely important that we ensure the continuity of our exile Tibetan administration and our struggle until the issue of Tibet has been successfully resolved," the letter continued.

"If we have to remain in exile for several more decades, a time will inevitably come when I will no longer be able to provide leadership. It is necessary that we establish a sound system of governance while I remain able and healthy, in order that the exile Tibetan administration can become self-reliant rather than being dependent on the Dalai Lama."
In Tibet the Dalai Lama was the temporal and spiritual ruler of Tibet, an absolute monarch effectively, though the current Dalai Lama had planned for reforms at the time of the Chinese invasion. In exile he continued to lead the government but in 2001 the prime minister, Lobsang Tenzin or Samdhong Rinpoche, has effectively had the final word in political affairs.
Additional note: It is not a sure thing, according to the prime minister, that this resignation will be accepted. He also warned of a political dead-lock being a possibility over this between those more traditional and religious forces and those supportive of a more "modern", secular and totally democratic government.
Posted by MadMonarchist at 9:14 PM