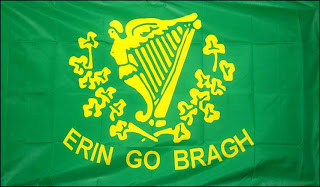 A happy St Patrick's Day to one and all. In the United States it is, of course, the St Patrick's Day parade in New York which has been the biggest, best known and at times most controversial. What very few know (other than monarchists, I'm sure you all know this already) is that the first ever parade in New York City honoring St Patrick was actually held by Irish troops wearing the red coat of King George in 1766. Ireland can be a curious place for monarchists. Go up north and you will find what seems to be (and often is) the most staunchly monarchist people in the world. Their only problem is the presence in their midst of those so wrapped up in their own past rivalries that they hate their "enemies" more than they love their monarch. On the other side of the border, quite to the contrary, you will find one of the most staunchly republican populations in the world; zealous enough in their devotion to "the republic" as to rival even France and the United States. However, I've never met an Irishman who wasn't a republican yet who was not also very proud to tell me which Irish king he is descended from. Surely there was never a country so heavily populated by republicans of royal blood. 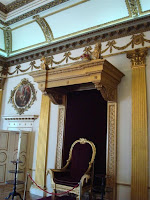 Anyway, I shall pass this day listening to some good, old, sad Irish songs, watch people on TV act like idiots in the name of a very holy saint (and a very orthodox saint too -he was not just some nature-loving proto-green party supporter). Then, perhaps we should all say a little prayer that with all the attention given to Ireland and St Patrick today, more people might just take a little concern at the fact that the country is going down the tubes. Here's an idea: the republic has not done well by you, you're not having the British back, that is perfectly clear, so why not give your own monarchy a try? An Irish High King could hardly do worse than the current republican lot and you could have someone to meet the Queen on an equal footing when she comes to visit. Yes, yes, I know, crazy talk, but what else would you expect from ... The Mad Monarchist?
A Happy St Patrick's Day to all (and my apologies if the above flag looks a little crude but I really prefer the Irish-American flag to the republican tricolor, just a matter of taste).
Those interested can view some past posts and comments concerning Ireland here.
Posted by MadMonarchist at 12:44 AM