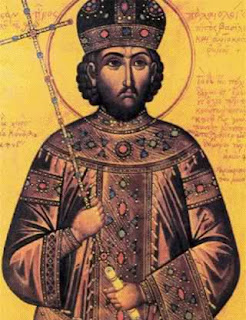 Monarchy is full of symbolism and monarchs are partly symbolic things and there are few better illustrations of this than the life and death of Emperor Constantine XI Palaiologos. How is this? From his rise to his fall he was never effectively much more than the over-titled commander of a single city surrounded by a sea of foreign enemies. The world did not change much because of his downfall, but it had a significance out of all proportion due to the fact that it was a tragedy that had been so long in coming. He was the last Eastern Roman Emperor and that mattered, that gave him and his tragedy great significance. For all intents and purposes the East Roman Empire had fallen long before with Byzantine greatness being reduced to the city of Constantinople and a few isolated enclaves. However, just as the fall of Rome was significant to the west even though the Emperor resided primarily at Ravenna, so too did the fall of Constantinople send shock waves across the Christian world. As long as that city and its emperor remained all did not seem lost. Therefore, when it was lost, it was a crushing blow to the moral of the western world and an unparalleled triumph for the still rising Ottoman Empire.

Constantine was born on February 8, 1405 in Constantinople, the son of Emperor Manuel II and a Serbian princess. He did not venture much from the city during his youth and became intimately aware of the workings of the city and the political situation. During the reign of his elder brother, Emperor John VIII, it was Constantine who acted as regent on his behalf when the Emperor was in Rome working out a (temporary) reunion of the eastern and western churches. Constantine received a greater trial by fire when he became Despot of Morea (the Peloponnesus). Always an active and zealous ruler he built up the fortifications of the area and expanded it, to the consternation of the Ottoman Turks who were the overlords of the area. Sultan Murad II led an army in a punitive expedition against Constantine, devastating his fortifications with their new, heavy bombards and Constantine only narrowly escaped. He had seen first hand the metal of his primary foe.

In 1449 he succeeded to the throne as Emperor Constantine XI but it was, as usual in the Byzantine Empire, not an entirely smooth transition. His brother Prince Demitrios opposed him, standing against the reunion of the Catholic and Orthodox Christians as his base of popular support. Ironically enough it was Sultan Murad II who was called upon to arbitrate the dispute and, despite their earlier conflict, he took the side of Constantine who was finally crowned East Roman Emperor in 1449 but not in Constantinople. Patriarch Gregory III, seeing Constantinople surrounded by an Ottoman sea, supported the Catholic-Orthodox reunion and this made him very unpopular with most of the clergy who seemed to prefer risking Islamic rule over Constantinople rather than joining hands with Rome once again. This made a grand coronation in the capital rather impolitic. Constantine XI came to his city and began to rule but it was an isolated position, personally as well as politically. He had married twice but both wives died not long into their respective marriages, a third attempt fell through and there would not be time to arrange another. Without a wife and without children, all hopes for Constantinople rested solely on the shoulders of their new Emperor alone.

With little time to settle in to the role a massive threat was soon confronting the new emperor. Sultan Mehmed II came to the throne of the Ottoman Empire and, despite his youth, made it clear that he was a force to be reckoned with and vowed to at last conquer Constantinople and make the Hagia Sophia a mosque. In the spring of 1452 the Sultan took the first steps of besieging the city and Constantine XI was faced with a nearly hopeless position. He had only a relative handful of soldiers with which to defend a massive city against a Turkish army possibly numbering over a hundred thousand. Moreover, the decline of Byzantine civilization was very noticeable in the lackluster nature of the defending force. The fact that only as few as 5,000 men from a city as populous as Constantinople, upwards of 100,000, does not speak well for the fighting spirit of the public at this stage -and three-fifths of those men were soldiers from the Latin west, largely Italian -from Genoa and Venice. Many seemed to have viewed the empire as a lost cause and refused to make much of an effort to defend themselves and many were also more concerned with carrying on the Catholic-Orthodox/west-east feud than they were with defending against the Muslim invasion.

Emperor Constantine, unlike others, made defending the city his paramount concern, reaffirming the Catholic-Orthodox reunion and calling upon the Latin west for help. He was extremely energetic in seeing to the provision of his army and the populace, overseeing the defenses of the city and the distribution of his meager military forces. The Sultan, at the outset, offered the Emperor his life if he would surrender the city but the Emperor bravely refused and fought courageously throughout the siege. He constantly exposed himself to the enemy, defending the walls alongside his soldiers, fighting alongside them, encouraging them and inspiring them. He also showed himself to be an able diplomat and a clear-minded leader in smoothing over the bickering between the Genovese, Venetian and Greek factions of his army and their proud commanders. In this ultimate trial he proved himself worthy to the overwhelming task that confronted him. 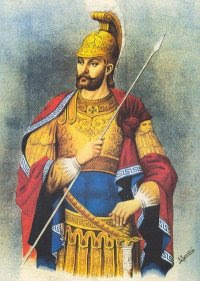 However, it was, of course, ultimately a lost cause. The Ottomans, with their modern artillery of German design, battered down the walls and swamped the tiny band of defenders. Emperor Constantine remained true to form. In the final attack on May 29, 1453 legend has it that he stripped off the symbols of his imperial rank, grabbed his sword and led the last desperate charge into the onrushing enemy horde. The exact nature of his death remains unknown. Some say he was so mutilated in battle that his body was never identified. Others say that his body was found and that his head was cut off and carried back to the Ottoman court as a trophy. In any event, his heroic fall marked the final end of the ancient East Roman Empire, with no wife and no heirs there would be no continuation of the Palaiologos dynasty in his line. Constantinople was taken, eventually becoming the Ottoman capital and true to his word the Sultan turned the Hagia Sophia into a mosque, which it remained until fairly recently when it was converted to a museum. The recovery of Constantinople would become the unobtainable goal for western Christendom (at least the Catholic powers) for centuries to come.

Today the legacy of Constantine XI remains in Eastern Europe. Many Orthodox Christians and Greek Catholics regard him as a saint. His name was invoked in the Greek war for independence and the numerous Balkan conflicts. Also, much like King Arthur in England, Emperor Frederick I in Germany or Genghis Khan in Mongolia, Emperor Constantine XI became the great legendary monarch of history for the Greeks with the same story emerging that an angel had rescued him from death and turned him into marble, preserving him so that when his people most needed him, the Emperor could rise again to lead them to glory. The legend of the “Marble Emperor” is itself a testament to what an impression he made on his people during his short reign and his heroic downfall.
Posted by MadMonarchist at 12:50 AM