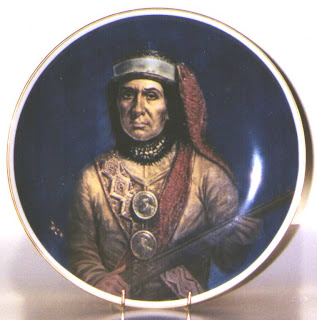 Chief Guyasuta of the Seneca was one of the most significant American Indian leaders throughout the period of the French and Indian War, the subsequent rebellion of Pontiac and the Revolutionary War. He was born sometime around 1725 in New York but moved with his family to the Ohio area when he was still quite young. During his youth the Iroquois Confederacy was officially neutral in the colonial rivalry of Britain and France but the Senecas in the native land of Guyasuta tended to be more positive toward the French. Their effort to fortify the area to stop British encroachments sparked the French and Indian War and, many years later, an elderly George Washington recalled Guyasuta being employed as a scout on his mission to the area. Later, Guyasuta was part of the French and Indian attack on the doomed expedition of General Edward Braddock who was marching on Fort Duquesne (now Pittsburgh, Pennsylvania) only to be ambushed and decimated by a small Franco-Indian force. He later went to Montreal to negotiate the official alliance between the Senecas and the French with Governor Vaudreuil.

The French and their Indian allies dominated the early part of the war, against all odds, but ultimately were overpowered and defeated by the British. In the immediate aftermath of the conflict the heavy-handed approach of the British under General Amherst toward the Indians prompted the outbreak of Pontiac’s Rebellion. Guyasuta was heavily involved and though he had not planned the actual uprising he was well known as one of the most hawkish leaders in urging his people to come together to fight the British from Detroit to the Mohawk Valley. When fighting broke out Guyasuta served with the Delaware besieging Fort Pitt (formerly the French Fort Duquesne) and a number of other engagements in the conflict. Once again though, Guyasuta was on the losing side and when it was clear that victory was no longer possible he was one of the first to accept the fact, make his peace with the British and then accept their offer to act as a mediator to try to convince his countrymen to do the same. Thanks to his intervention more than 200 British captives were released (though some would have rather remained with their “captors”). This became something Guyasuta was known for and he was employed on similar missions afterwards. He helped negotiate and end to hostilities, the release of other prisoners and acted as an intermediate for the British for quite some time.

British Crown officials came to value him greatly and the western Indians relied on him to make their case when they had grievances against the British government or British settlers. Usually these complaints involved unfair business policies by local merchants or the ruinous effect of alcohol on the native tribes. He also served as a guide and a geographical expert because of his vast knowledge of the local terrain and the various tribes of the region. One of his last diplomatic missions was an effort by the British to relocate the fearsome Mingos which Guyasuta was ultimately unable to do. This lack of success was unusual for Chief Guyasuta but his diplomatic duties were interrupted by the outbreak of the Revolutionary War. Once again he and his people were being called upon to choose sides in a conflict between the European settlers of North America.

The Continental Congress sent representatives to meet with Chief Guyasuta and other Native American leaders in 1775. They were anxious to win his sympathy and, if possible, induce him to join the war on their side. However, despite his past fights against the British, Guyasuta was too astute to buy what they were selling. He could see that the various political leaders were not united and thus their promises would likely be unreliable. He and the Six Nations tried to remain neutral and Chief Guyasuta tried to convince the Mingos to do the same, a fact which earned him a silver gorget and the rank of colonel in the Continental Army which regarded it as preferable to keep the Indians out of the war for fear they might join the British. However, it was to no avail as the continued American encroachment on Indian lands finally persuaded most of the Indians to join the war on the British side. In 1777 the decision was made by the Six Nations and Chief Guyasuta joined in the fight for his people and the Crown.

Guyasuta was among the many Indian warriors who accompanied Lt. Colonel Barry St Leger to Ft Stanwix. When a column of revolutionary militia moved in to relieve the fort the Indian warriors wiped them out at the battle of Oriskany. In retaliation, the Continental Army launched a massive raid up the Allegheny River destroying every Seneca village in their path. Guyasuta tried to defend the area but the hard-pressed British forces, already outnumbered could spare no one to help. Chief Guyasuta later served on another diplomatic mission to the Indians of the Midwest before leading a raiding campaign around modern-day Rochester, Pennsylvania. In 1781 he took up more peaceful duties again but, the following year, was back on the war path, despite his advanced age and poor health, burning Hannastown, Pennsylvania and attacking Wheeling, Virginia (now West Virginia). When the war ended in an American victory Guyasuta was forced to make his peace with the United States and there were efforts to make use of his diplomatic talents again in making peace between the U.S. and the native populations but he was unable to do much before his death in 1794.
Posted by MadMonarchist at 1:21 AM