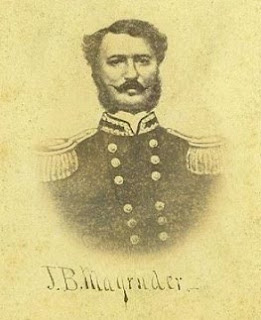 John Bankhead Magruder, most remembered as a major general in the Confederate army during the American War Between the States, was known in his own time as “Prince John” though there was nothing royal about it. However, the last nation at war he served was a monarchy, the Mexican Empire of Emperor Maximilian. He was born in Port Royal, Virginia on May 1, 1807 and as a young man attended the University of Virginia where he met former President Thomas Jefferson. He gained an appointment to West Point and graduated in 1830 as a second lieutenant and served with the infantry and later the artillery. He served in the Second Seminole War in Florida and with great distinction in the Mexican-American War. He was promoted to brevet major for his “gallant and meritorious conduct” at the battle of Cerro Gordo and later to brevet lieutenant colonel for his heroism at the storming of Chapultapec castle. He later served on the frontier and was known for his love of theatrics and his talent as a singer. He spoke with a lisp and was known as something of a dandy and was nicknamed “Prince John” because of his flamboyant dress uniforms.
When the Commonwealth of Virginia seceded from the Union he resigned his commission and was quickly appointed brigadier general in the army of the new Confederate States of America. He led Confederate troops to victory in the first land battle of the war at Big Bethel, Virginia and later served with great distinction on the peninsula. Putting his love for theatrics to work he managed to stop the entire massive Union Army of the Potomac under the cautious General George B. McClellan with only one small division of Confederate troops. He constructed dummy cannons, marched men in circles in front of clearings to exaggerate their numbers, had officers shout orders to troops that didn’t exist, had bands play at odd hours as if welcoming more soldiers, fired artillery in scattered directions and stuck hats on ram-rods in trenches to give the illusion of being filled with men. His ruse was so successful that the Union commander thought he had the whole Confederate army in front of him and even then grossly over-estimated its size. However, Magruder later fell out of favor somewhat during the Seven Days battle, though his tardiness was not really his fault, and he was transferred to the Trans-Mississippi department.
Once out west Major General Magruder was put in command of the Confederate forces in Texas where he soon showed his worth yet again. On January 1, 1863 he led his small Confederate army to victory in a combined land and naval counter-attack against the Union forces on Galveston island. This victory at Galveston was recorded as the most humiliating defeat in the history of the U.S. Navy and “Prince John” Magruder was the man responsible. No Union effort to invade Texas was ever successful and Magruder was forced to spend most of his time in administrative duties though he was the deputy to the department commander General Edmund Kirby-Smith. For a time he was transferred to command Confederate forces in Arkansas but was soon back in Texas where he saw out the end of the war and signed the official surrender of the Trans-Mississippi department in New Orleans (the last region of the Confederacy to call it quits). 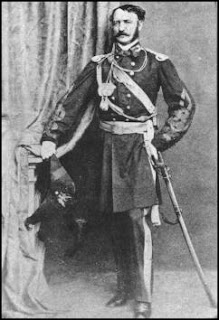 However, Magruder found the idea of living under Yankee rule rather distasteful and, refusing a parole, like many Confederates, journeyed south to Mexico. As a matter of fact, many Confederates went abroad after the war, some to Britain or France, some to Canada and many more to Mexico or the Empire of Brazil. Magruder made quite a splash in Mexico City and was warmly welcomed to the court of Emperor Maximilian at Chapultepec -the same castle he once invaded. Quite at home in the grand style and courtly ceremony of the place he offered his services to Emperor Maximilian who gladly accepted. In fact, Magruder became something of a trend-setter as many men in Mexican society began to imitate his style of dress. Maximilian made him a general in his army and Magruder encouraged other southerners to follow his example and come to Mexico where they would find the monarchy of Maximilian very much to their taste. The Emperor hoped to benefit from the cream of southern society moving south of the border and Empress Carlota hoped that the Confederates might become a sizeable force to compensate for the loss of the French who were clearly on the way out.
Magruder brought his family over (they had spent the war in Florence, Italy) and was so enthusiastic about urging his fellow Confederates to come to Mexico that Emperor Maximilian appointed him to head the Land Office of Colonization to oversee the immigration of Confederates to Mexico and the establishment of colonies for them to continue their plantation lifestyle along the road from Veracruz. This was land which Juarez had originally taken from the Church and, to the extreme annoyance of the local hierarchy, neither the French nor Maximilian thought it prudent to return it. Religious Mexicans refused to use the land and so giving it to the Confederates seemed a perfect fit. However, as we know, before the Carlota Colony (named in honor of the Empress whom the Confederates adored) really became firmly established the French army pulled out of Mexico (under pressure from the U.S.) and most Confederates could see that Maximilian was doomed and made their way home. Magruder returned to Texas and settled in Houston where he died on February 19, 1871.
Posted by MadMonarchist at 7:14 AM