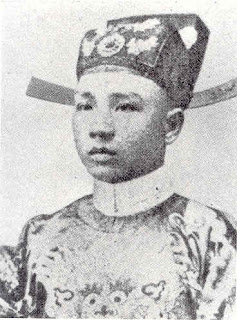 Born in 1882 as Prince Nguyen-Phuc Hong Dan, the royal descendant of HIH Crown Prince Canh was later given the official title “Ky-Ngoa-Hau” or “outside the capital marquis”. He was a descendant of the fourth generation of His Majesty Emperor Gia Long, founder of the Nguyen Dynasty, by the line of his eldest son, Crown Prince Canh. The Crown Prince was the grandfather of Marquis Cuong De.

He was living comfortably by the An-cuu River when he was visited by the anti-French nationalist and (at the time) loyal monarchist leader Phan Boi Chau and his friend Nguyen Thiep in the Year of the Hare (1903). It was then that the Prince and Phan Boi Chau made a pact to join together in fighting against French Colonial rule in Viet Nam. As a member of the Nguyen Imperial Dynasty and a descendant of Emperor Gia Long, Marquis Cuong De was to be a focus for patriotic loyalty and a symbol of the national history and culture. As such, he was made symbolic head of the Viet-Nam Modernization Society of Phan Boi Chau when that movement was initially founded.

Early on in 1906 Marquis Cuong De went to Japan to study at Shimbu Gakko and later at Waseda University. In 1909 he was forced to leave Japan when the Japanese and French governments became more closely associated and the Japanese wished to disassociate themselves from any connection to the enemies of France. Prince Cuong De then moved to Hong Kong, Thailand, and China before returning to Nam-Ky (Cochinchina/South Vietnam) from Singapore in 1913 to meet with resistance leaders and raise funds for the struggle. While he had been in China, His Majesty Emperor Thanh Thai had tried to reach him to join the resistance movement but was arrested by the French and deposed.

After the trip back to Viet Nam Prince Cuong De was arrested in Hong Kong but managed to escape and travel to Europe. In 1915 he returned to Japan where he was given promises of support for Vietnamese independence. Even when the Chinese influence changed the direction of many of the nationalist efforts Prince Cuong De remained in the most honored position. In the south, which was cut off by the French from the rest of Viet Nam, Prince Cuong De was supported by large numbers of Vietnamese patriots. In 1943 the prophet and leader of the Hoa Hao religion, Huyn Phu So issued many statements calling for freedom from the French, support for Cuong De and loyalty to the Nguyen Dynasty he represented. The prophet wrote, "How can one live with joy and pleasure at a time when the King is seperated from his subjects. Catholics and the Cao Dai patriots also supported Prince Cuong De and the principle of an independent monarchy in Viet Nam. 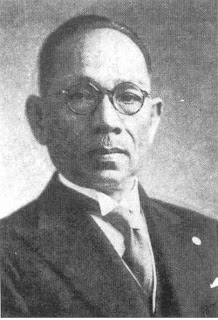 Many thought that after the Japanese occupation of Indochina the Marquis Cuong De would oppose the new government of His Majesty Emperor Bao Dai. However, on May 20, 1945 Prince Cuong De stated in a letter that his goal had always been to restore the independence of Viet Nam and that he had never had any desire to take power for himself but honored the declaration of independence and was loyal to Emperor Bao Dai and the legitimate government. After independence had been declared his goal had been achieved. Later Emperor Bao Dai invited Prince Cuong De to accept an important place in the new nationalist government and a large welcome ceremony was planned in Saigon by the Cao Dai leader Tran Quang Vinh. However, the chaos of the war forced the Prince to remain at home. The Communist Revolution in August, 1945 ensured that the Marquis Cuong De would never see his country again and the independent monarchy came under attack by the Communist forces. The revolutionary prince died in Tokyo on April 5, 1951.
Posted by MadMonarchist at 12:35 AM