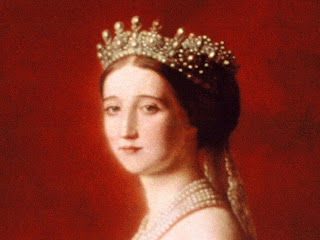 For a long time the Second French Empire has been viewed by historians in a negative light. Recently, however, that image, and particularly that of the Emperor Louis Napoleon III has been somewhat rehabilitated. Yet, one person who has been largely ignored through all of this was the great woman who stood beside Napoleon III throughout his reign and that was his wife, the Empress Eugenie. She was a devout Catholic woman from Spain, a woman who came to model herself somewhat after Marie Antoinette, and yet she was vastly different in many ways. This Spanish beauty was born Maria Eugenia Ignacia Agustina de Palafox y Kirkpatrick, Countess de Teba, on May 5, 1826 in Granada, Spain. Her parents were Don Cipriano de Palafox y Portocarrero, the Count of Teba and of Montijo, the Marquis of Algava and the Duke of Pearanda; and his half-Scottish, half-Spanish wife, María Manuela Kirkpatrick.

Eugenie de Montijo came to Paris, France to be educated at the elite Convent of the Sacre Coeur. Already raised as a practicing Catholic, at Sacre Coeur she was even further grounded in the faith and became a very devout and zealous daughter of the Church. She first met Prince Louis Napoleon Bonaparte when he was serving as the President of the French Second Republic. Eugenie accompanied her mother to numerous balls held by the Bonaparte prince turned president at the Elysee Palace. Louis was immediately taken with the young Spanish beauty and already had a reputation as a womanizer. Eugenie became the object of his desire, but she made it adamantly clear that no man but her husband would ever have her. This should, perhaps, have told Louis that Eugenie might not be the right woman for him, but instead it only made her all the more desirable to him as the "forbidden fruit".

The President, however, was a man rather free with his affection and seemed to forget Eugenie for a time while he pursued Princess Adelaide von Hohenlohe-Langenburg, a teenage niece of Britain's Queen Victoria. However, when the Princess rejected his proposal of marriage, Louis turned again to the Spanish countess and began inviting her to parties, sending her gifts and pursuing her in every way. Eventually, the two were engaged and finally married on January 30, 1853. It was only the year before, at the end of his presidential term, that Louis declared himself Emperor Napoleon III and restored the French Empire, which was later confirmed by a plebiscite. The French people, who often seemed just as suspicious of foreign women as consorts to their monarchs as they had at the time of Marie Antoinette, expressed some opposition to the marriage. This prompted Napoleon III to make a speech from the throne saying, "I have preferred a woman whom I love and respect to a woman unknown to me, with whom an alliance would have had advantages mixed with sacrifices." 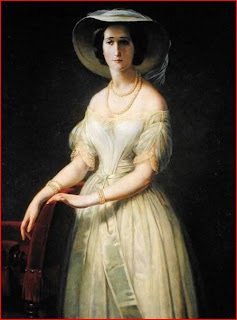 Nonetheless, many opposed the match, some out of simple xenophobia, and others who seemed to manifest a great deal of snobbery very quickly after the elevation of France to imperial status, saying that a 26-year-old Spanish countess was not an equal match for an Emperor. Traditional enemies of France, especially the Bonaparte family, such as Great Britain were extremely amused by this attitude, noting that the Bonaparte family, which put on such grand, imperial pretensions was only two generations away from unknown Corsican commoners. In their eyes, if anything it was the new Empress Eugenie who was, in fact, marrying below her station.

A major reason why Napoleon III had rushed to marry after becoming Emperor was to have a legitimate son and heir. Empress Eugenie gave him the son he wanted on March 16, 1856 when the Prince Imperial Napoleon Eugene Louis Jean Joseph Bonaparte was born. He was to be their only child. This did a lot to give the new French Empire an appearance of stability and Empress Eugenie herself did a lot of what would be called today "public-relations" work for the new government in France. She was beautiful, pleasant, impeccably polite and proper and simply glamorous in the way that royal consorts are supposed to be. She charmed many people around the world simply by her example into relenting in the prejudice held against having a Bonaparte ruling France once again. She was also, like Marie Antoinette, a fashion trend-setter such as when she wore the cage crinolines for the first time in 1855, all of Europe emulated her and likewise when she abandoned the large bell-like skirts that had been in style for quite some time, the western world followed her example. Empress Eugenie's fascination with Marie Antoinette also sparked a revival of the styles of dress, buildings and furnishings from the time of King Louis XVI. 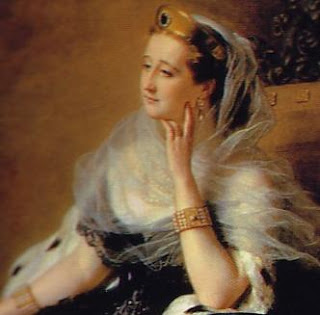 However, her life was not all glamorous social events but included danger and important political work as well. On January 14, 1858, she and Napoleon survived an assassination attempt and although Napoleon III was never a faithful husband, he did depend on the support and advice of Eugenie who possessed great intelligence and education as well as a devout adherence to her Catholic principles. Napoleon III rarely acted without her advice and she acted as ruler of France on her own on occasions in 1859, 1865 and 1870 when she was Regent of France in the absence of her husband, during which times she proved herself more than equal to the task. She also took it upon herself to act as the defender of the Catholic Church around the world when other countries would not. It is no exaggeration to say that virtually every decision made by Napoleon III that benefited the Church and Catholic society was done on her advice.

In 1858, after hearing of the intense persecution of Catholic missionaries and local converts in Vietnam, Empress Eugenie supported the French naval expedition to come to their rescue. These operations eventually led to the establishment of the colony of French Indochina, which included all of modern day Laos, Cambodia and Vietnam. Likewise, in the 1860's the plight of the Catholics in Mexico came to her attention when Mexican conservatives who had been driven into exile by the anti-clerical regime of Benito Juarez came to France to plead for help and Empress Eugenie supported French intervention in Mexico to help them. In 1864 this led to the enthronement of the Austrian Archduke Maximilian and his Belgian wife Princess Charlotte as the Emperor and Empress of Mexico. She also pressed for French intervention in the Ottoman Empire when the Christians in Lebanon came under attack. French pressure eventually forced the Turks to give the Lebanese their own government under Christian control with increased rights for Lebanese Catholics of the Maronite-rite. It is true that in most or all of these foreign interventions, Napoleon III had some ulterior motive he wished to serve as well, but for Empress Eugenie it was a simple matter; wherever the Church was persecuted she had to do all in her power to come to her aid. 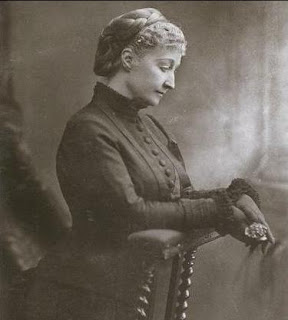 Probably the best and most crucial example of this great work by Empress Eugenie to influence French policy in a good way came when the Papal States came under attack by the very same Italian revolutionaries of whom Napoleon III himself was once a member. Empress Eugenie was a ceaseless defender of the Pope and his rights. She put a French warship at his disposal when Blessed Pope Pius IX was briefly overthrown and offered him refuge in France in the old papal city of Avignon (which for obvious political reasons of course the Pope declined) and French troops later restored the Pope to Rome as well as defending the Eternal City when the rest of the Papal States were conquered by the Italian nationalists. Empress Eugenie was also a powerful ally of St Bernadette, the visionary of Our Lady of Lourdes. Anti-Catholic officials in the area had closed the grotto, but Eugenie was a believer and when the Prince Imperial was cured by water from Lourdes which Eugenie had sent for, the Empress used her influence to have the grotto reopened and protected.

Empress Eugenie was a strong woman who faced problems and would not bend to unjust pressure, and sometimes this strength of principle had dire consequences. When the militant Prussians began trying to maneuver France into war, Empress Eugenie urged her husband to take a firm stand. Unfortunately, by this time, Prussia had grown too strong and the antagonism Napoleon III showed the Austrians and Russians now came back to haunt him as he had to face the Prussians and their south German allies alone. In 1870 this led to the disastrous Franco-Prussian War which saw the defeat of Napoleon III and the capture of the Emperor himself at the battle of Sedan. The French Empire soon collapsed when faced by the Prussians without and early communist revolutionaries within. In 1871 the united German Empire was proclaimed in Versailles and the Germans had replaced the French as the dominant European power.

Empress Eugenie was forced to go into exile with her family in Chislehurst, Kent, England. Emperor Napoleon III died in 1873 and their son, Napoleon IV, died in 1879 in South Africa while serving with the British army against the Zulus. Empress Eugenie moved to Farnborough, Hampshire and later to her villa at Cap-Martin near Biarritz, but as part of the agreement allowing for her return to France she avoided all political issues. Empress Eugenie enjoyed good relations with the British and in 1887 she was honored with the position of godmother to Princess Beatrice's daughter Victoria Eugenie of Battenberg, who later married King Alfonso XIII of Spain, the last Spanish monarch before the era of the republic and civil war. Empress Eugenie died while visiting her native Spain in 1920 at the age of 94 and was buried in the Imperial Crypt at Saint Michael's Abbey, Farnborough, which already held the remains of her husband and son.
Posted by MadMonarchist at 6:09 AM